Showing posts from October, 2013
Show All 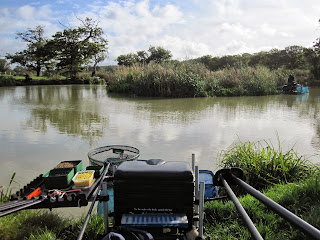 It's been a month since I'd been on the bank and I was itching to get out.  Pikey organised a match at Morehouse Farm Fishery in East Sussex which proved too tempting to miss out despite the weather!  A 6am wake up call with it raining heavily didn't look fun, but I had to get out. I arrived at the fishery with plenty of time to spare and met up with the lads.  Today would be a mix of MFS members and Morehouse Farm locals.  We would be fishing the Sidewinder lake which is a mix of a snake type lake and open water with a causeway and island to go at. The Draw It was quite a windy day and having never fished here I wasn't too worried about which peg I had.  I draw Peg 42 which had two margin swims and open water in front.  If I wanted to fish over I'd have to break out the bomb or method rod. The Set-Up I decided that I would only set up the pole and my swims were as follows: Margin to my left and right 6 metre line straight ahead at full depth and shall
Post a Comment
Location: Wivelsfield, East Sussex RH17 7RE, UK
Read more
More posts