Showing posts from December, 2014
Show All

Fellow anglers, The BBC have announced a new program called, "The Big Fish". "This exciting new format for BBC Two will see anglers from across the country testing their skills in some of the most stunning and challenging environments around the world." -  Kim Shillinglaw, Controller, BBC Two Further release information here: http://www.bbc.co.uk/mediacentre/latestnews/2014/the-big-fish Filming will be April, May, June 2015 in overseas locations. I've certainly filled out an application!  Here is your chance to "be on a show, so go get your applications in by following the link below: http://www.bbc.co.uk/showsandtours/beonashow/the_big_fish Good luck, Lewy **UPDATE : I got through the interview process and the filmed interviews, unfortunately never made the final audition... Good luck to those Anglers on the show, I'm looking forward to watching it.
1 comment
Read more 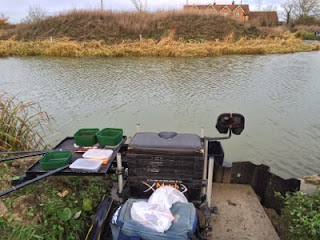 Dani's - Peg 4 With Christmas approaching and the weather starting to really turn wintry I was itching to get out on the bank again.  A quick call to Phil at How End Fishery to find out if there were any open matches available and he mentioned his club, Kingfisher AC where having a winter league competition on Sunday. I know quite a few of the lads who would be fishing and they kindly let me join in on the action.  Saturday morning brought the first frost in winter and Sunday morning while not frosty was pretty cold.  The journey from London to How End was pretty quick at early o'clock on Sunday and I was quickly greeted or maybe abused by the lads who were already there.   The Draw Today we would be fishing Dani's lake.  The wind was pretty strong and the clouds were not looking inviting.  So where would I be today?  The hand reached into the Puma trainer bag and pulled out Peg 4, probably one of the easiest pegs to get to from the car park. The Set-Up Setting
Post a Comment
Read more
More posts