October 10, 2011
After my day with Bob Nudd MBE and after hearing great reports about Andy May I decided to book a days fishing with Andy May.  After many email's getting round Andy's and my own diaries we eventually agreed on 7th October at Cudmore Fisheries in Newcastle-under-Lyme.

It was an early start for me, leaving London at 4:30am to get to Cudmore, the traffic was kind, but the weather wasn't I arrived at Cudmore for 7am.

I met Andy at 8am and we had a cup of tea, bacon sandwich and chatted about what I wanted to achieve for the day and I explain that I would like to go through a typical match scenario, brush up on pole and method feeder techniques.

As the weather hadn't been kind overnight we didn't know what to expect from the fishing.  None-the-less Andy decided to take us on Match Pool 1.  The wind had changed direction and so Andy selected peg 22 for the day with a little bit of ripple on the water.

Andy went through my pole floats that I had rigged up and explained the use of each one.  I'm currently in process of simplifying my rigs.  Interestingly, Andy like to prepare his rigs on the bank, explaining that he prefers to set a rig up to fish that peg on the day rather than using.  He also explain the main difference between summer and winter setup, mainly down to the bristle and flat body thickness, thicker in summer, thinner in winter... simple really! 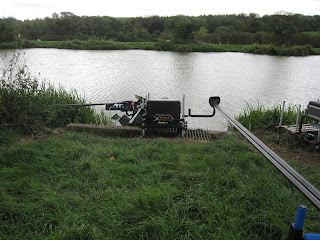 The Set-up
Two pole lines, 6 metres and 13 metres.  Andy set up the pole rigs on the bank and "guessed" the depth.  Now some readers may have heard that Andy does not own a plummet, well based on his depth guessing ability you would think that was the case, but I can confirm that Andy May does in fact own a plummet, a big one at that... see tips below as to why.

Method line would be the centre of the peg opposite.  Again, I got another great but simple tip.  If fishing to an opposite peg, fish in the centre of that peg as that is where anglers keepnets are placed, which in turn helps to keep the bottom clear from dead reeds.

The Session
The bites were few and far between and the fishing was tough.  Maybe the overnight chilling temperatures, wind direction change, rain and quick hail shower during the day had put the fish off?

After about 30 minutes I hooked the first fish of the day on 6mm expander, which after a couple of minutes shed the hook...

Further indications where few and far between, a change of hook size, expander size down to a 4mm expander and then hook length diameter finally netted our first carp. 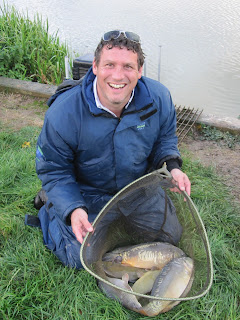 We tried the 13 metre line, but the wind was just too much, gusting and I ended up feeding lots of other lines as I simply could not hold the pole at the marker in the gusting wind.

As the day rolled on, Andy demonstrated "up in the water" techniques, the feeding, getting the fish confident and then the rigs and pole / catapult technique which again is easier to show than to write about.

We had a spell on the method feeder which didn't have any success.  At the end of the day we managed four carp, two tench and one gudgeon.

Conclusion
While the fish didn't play ball, the day with Andy was well worth it.  The tips and tricks that you pick up when having a day with a great angler is invaluable.  The weather wasn't the best but I thoroughly enjoyed my day, most of it spent laughing.

I can highly recommend a day with Andy May.  Oooosshhh!

Below are just some of the tips I picked up... as you can see there is quite a few...

Top Tips for the day:
Feeding and Presentation are the two greatest success factors to a good session Andy explain over breakfast.  While we read many articles in the angling press and on-line actually going through the small techniques and being reminded during the day certainly helped me to improve my fishing, here is a summary of what I picked up during the day.

Fish for everything that swims - Andy explained that in a match he does not target one species, such as carp, but rather wants to catch anything that is in front of him.

Concentrating on a single bait - the only baits we used for the day were pellets and dead red maggots.  Micro Pellets, 6mm expanders and 4 mm expanders.  Rather than having a huge array of baits available, concentrate on getting the pellets to work, if no bites come, change the hook size and or hook length.

Line diameters - Something which confused me on my return to fishing was the fact that line diameter rather than break strain is the important factor.  This became apparent at the beginning of the session when searching for those first bites.  A change in pellet size, then hook size didn't produce bites, until the hooklength diameter was changed from 0.14 to 0.12, when bites started to arrive.

Feed Micro Pellets balls - supporting the fish for everything tip.  Micro pellets attract all fish, feeding them in a ball ensures that they get to to bottom without being intercepted mid water.

Feeding - One fish at a time - Andy prefer's to feed for one fish at a time, especially as the weather is getting colder, the little and often approach is preferred.  So, with this every 10 minutes on the short line a small grape size ball of micro's was fed via kinder pot.

When hooking a fish, feed - when a fish was hooked on the short line, immediately throw a small ball of micro's into the swim, being as accurate as possible to settle the other fish in the swim, ready for the next put in.

Keep feeding your other lines - we had set up two pole lines, 6 metres and 13 metres.  Consistant feeding of the pole lines even if I wasn't fishing one was key.  Every 20-30 minutes the 13 metres line would be topped up with a small ball of micro's and a couple of 4mm expander pellets.  You get into a rhythm after a while, a swim may not be producing, but by feeding it, it should hopefully become stronger later on.

Pole Fishing Tips
Method Fishing Tips
We all tend to "clip up" to cast to a feature, but how many actually examine their casting technique?  Andy had clipped up the feeder and ask me to cast a couple of times for him to examine my casting technique, a bit like a golf lesson...  difficult to put in words, a lot easier to actually sit with someone and go throw it, but here goes...