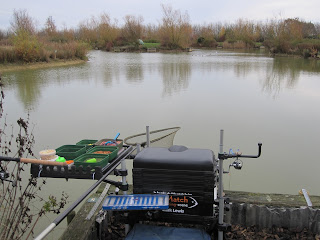 Mark is now 5 points down, it's all to fish for today, either bring the gap back to 4 or I extend my lead to 6 points, the pressure is on Mr Keightly today!

One thing we learnt today was late going clubbing and fishing really don't mix.  We arrived at Lawn Farm Fishery at 9am both nursing a bit of a hangover.

Mark's mum had kindly made us some "man" sandwiches with ham and pickle... perfect to help the hangover.

We were going to fish at Manor Farm Fishery in Biggleswade, but decided on a venue change as the winter sport at Lawn Farm is normally hectic as we experienced in a freezing cold february. 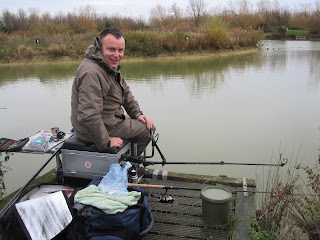 The larger lake, Willow was to be our lake for the day.  Mark selected his swim, open water and access to the island.  I picked the swim to his right which only gave me open water, but two spare swims on my right.  We fished with the wind at our backs and the temperature was 8 degree C.

The Set-Up
I set up a waggler and method rod.  Plan with the waggler was to fish at full depth to start and spray maggots and caster to try and bring the chub shallow.  The method rod was the back up plan in case nothing happened on the float rod.

Plumbing up the depth was around 6 foot. 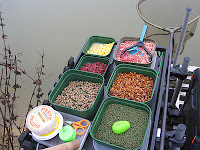 Bait for the day was a good selection, 4mm pellets, dead reds, sweetcorn, white/red maggots and casters including some dampened micro pellets for the method feeder.

The hangover took it toll and setting up seemed to take an age.  Mark decided to also fish the waggler and method feeder planning to take advantage of the island swim.  Again, we both suspected the fish would be in deeper water.

We were ready by 10am and would fish until 3pm.  Keepnets are not permitted at Lawn Farm so we would awards points per fish and keep a tally on our counters.

The All-In
I baited double white maggot, fired out a pouch full of maggots and cast beyond the spray of maggots, expecting a quick take from a hungry silver fish... I waited, the float settled to the tell tail string of number 10 stots... nothing.  More maggots sprayed, the float never moved...

This pattern was to be repeated for the next hour, then a bite and the smallest most perfectly formed perch came to my hand... that definitely wouldn't score a point!

After 2 hours neither Mark or myself had had any bites.  Mark had been on the method feeder.  I decided to put the method feeder out with a full worm on the hook.  I planned to fish exactly as I fished yesterday looking for line bites while catapulting casters, maggots and pinging pellets.  45 minutes past and finally the tip flew round, a lovely chub around 2lb was in the net, finally a fish! 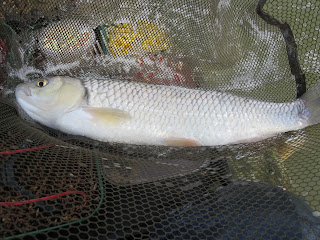 Meantime Mark had tried the waggler and still no bites.  A quick discussion and look at Cherry Tree lake, the smaller lake behind us we both decided on a move.

It took us both around 10 minutes to move and another 10 minutes for me to set up the pole.  First put in on the pole and I connected with a nice roach.  In the meantime Mark had finally caught about 4 nice silverfish.

Every put in I was kinder potting in some maggots and micro pellets, baiting a single red maggot my next bite brought a mirror carp of around 3lb.  The final couple of hours I managed another 3 carp, some skimmers, a chub of around 1lb.

The Result
Mark had finally caught some carp and more silvers.  At the end of the "match" Mark congratulated me on the win.  It was close but I was continuing to catch on the pole while Mark's fish were a little more sporadic.

Conclusion
Lawn Farm in winter is normally a hotspot, if you excuse the pun.  Willow lake fished extremely hard.  The move was the right choice for us to get some action and maybe we should have fished the smaller lake in the first place.

Drive back to London only took 90 minutes and the traffic was extremely kind for a Sunday night.  The next adventures of Mark and myself will be winter Piking, I'm sure Mark will make up some ground in the area after our last Piking session ;-)