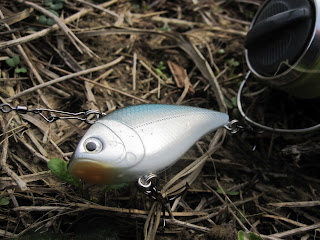 The beginning of the year always starts with a Piking session.  Last years Piking session didn't go too well and I ended up blanking...

So this year Mark and I decided to make a weekend of it and try some different venues.  Temperature across the weekend was 8-10 degrees C although there was a cold wind blowing.

The Set-Up
Both Mark and I decided that we would have a two rod approach, my Carp set-up was quickly converted to a Pike dead bait Paternoster rig and I'd recently brought back my Shakespeare Ugly Stik from Australia as my plugging / spinning rod.

Saturday 7th - The Venues
First stop Mark had decided to re-visit a local river at Elton, Huntingdonshire.  We fished the area down from the locke.

Both of us put out our dead baits and then "plugged" away the rest of the river.  After about 90 minutes and no indications we moved to the main river above the locke which produced nothing for either of us. 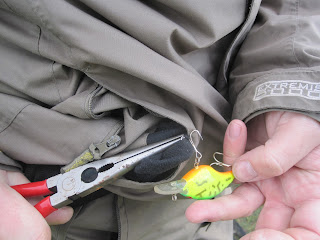 Interesting question for all the readers... Where is the worst place to store a plug?
Answer: In your pocket!

Mark had put a plug in his pocket and then spent a rather long time extracting it and it's set of trebles from the lining, it was so funny a photograph had to be taken as he pulled at the plug with his pliers!

Mark called time and decided we should try another venue down the road, so back in the car and we headed to Alwalton, Huntingdonshire to a section controlled by Peterborough District Angling Society, day tickets from the baliff on the bank.

We decided to just take the spinning rods with us and walked for around a mile down the main river leapfrogging each others swims after around 10-15 minutes in each swim.  Again we had no takes and started to wonder if we were doing everything wrong.

We both mixed up or retrieve speeds, tried sink and retrieve methods.  I eventually saw a jack pike take a glance at my plug but after recasting past it about 6 times, it just swam off into the deeper water... things were not looking good for the day.

So, again we got back to the car and decided to try Conington Fen, another area that Mark used to fish as a lad.  After more effort with the spinning rods and driving around the fens, our plans had failed and the first session of 2012 ended in a blank.

Sunday 8th - Ramsey Forty Foot
We fished the fen between Doddington Road and the A141 where we fished in 2011 Piking outing.

Starting from Doddington Road we chose our swims, cast out the deadbait rod and plugged away with the spinning rods, the same pattern as Saturday emerged, after 15 minutes we leapt-frogged our way down towards the A141. 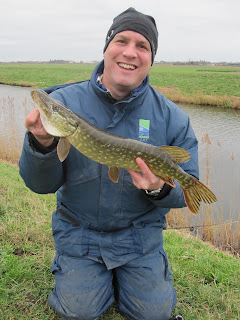 After 2 hours and still nothing banked we were really starting to worry.  I had just moved swim and put the deadbait rod out.  My second cast across the bank on a slow retrieve suddenly the plug was taken and a pike was on... it didn't put up too much of a struggle and was soon in the net.  Pictures taken and the fish released I was elated!

It then took me ten minutes to remove the plug and it's two sets of treble hooks from the net!

We packed up not long after with Mark conceding, so the first point of the Mark vs Mark for 2012 went to me.  A double celebration, first pike and first blood ;-)

A frustrating weekend with us both questioning if we were doing it all wrong or whether the fish just weren't feeding.
The Fens - Drains