July 08, 2013
It was another early start from London, 5:30am to be on the road for 6am... The drive up to Pidley in Cambridgeshire was easy given the time so I arrived at the Mad Cat Pub for our breakfast gathering with plenty of time to spare.  Colin Mercer was already at the pub car park having stayed over after a two day event close by.  The weather was glorious and there had been talk that the carp had been spawning on the saturday which made the fishing tough going for those competing with weighs well done on the normal 100-200lb bags!

We all arrived at the fishery, lucky for Colbrad we caught him up on the famers path into the fishery and he looked a little bit lost but was soon in the convey to the car park.  Everyone unpacked their gear and we all head down to Magpie lake for the draw.  The fish were indeed spawning again and all you could hear was splashing of fish chasing each other and the slurping noise that car make in the margins... it was an amazing sight to see.  I grabbed some footage from Peg 24 which, incidentally would end up Colbrads peg, with me next to him on Peg 23.  The footage is at the bottom of this blog page, but be warned for mobile users it is a 50mb clip! 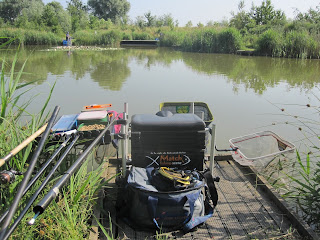 The Draw
Neil ran everyone through the rules, particularly the 4 keepnet rule, the orderly queue formed and I pulled out Peg 23.  Mark drew peg 11 so I wouldn't get to see him during the match.  My neighbour for the day would be Colbrad.  Arriving at the peg I could see that I had a method chuck to the platform opposite and two decent margin swims.  There was no ripple on the water, but the carp where happily splashing all around us, would they be interested in feeding?

The Set-Up
I had a match plan, which was as follows:

Bait for the day was 6mm, 8mm hard pellets, sweetcorn, dead read and groundbait.  We had around an hour to set-up which was achieved with around 10 minutes to spare due to the simple set-up.  I did however get a bit of a shock when I open my tackle box looking for margin rigs... they were still on the dining table at home!  So I had to setup a new one and hope that I wouldn't trash it during the match!

I also decided not to set up the pellet waggler.

The All-In
I opened up with the method feeder and a banded 8mm pellet to the far platform and started to throw 6mm pellets into my margin lines.  The tip was bouncing around all the time and then a savage bite and the first small carp in the net.  There are some large carp in Magpie lake but the little ones, especially the ghosties give a real account of themselves!

After the first 90 minutes I had 10 carp on the clicker and the match was progressing nicely.  It looked like the distraction of spawning for 2 days had also given the fish an appetite!

My left hand margin was alive with fish and the temptation proved too much, I had to have a look.  the margins are pretty deep on Magpie lake and the local anglers know to exploit them early.  Dropping the rig in with a banded 6mm pellet it was moving around all over and very quickly a fish was on.  The black hydrolastic and 0.18 line soon brought the fish to the net.  I was catching a lot quicker in the margin than on the method feeder so I'd stick here for the next hour.

After an hour it was clear that the fish were not on the deck, so I quick setup a shallow margin rig which worked a lot better.  The bites were furious, ripping the elastic out.  I took a couple of nice silver fish also and wasn't getting "silvered" out like some other angler did in their margins.

The left margin started to slow up so I switch to my right hand margin which still caught fish, but not at the rate of the left one.

Resting both swims it was back out on the method feeder.  At around 2pm, the fishing dropped of for most of the anglers in the bay we were in.  Colbrad had switched to paste and was catching steadily and his fish were of a better quality.

Around 3pm I went back on the left hand margin and started to get into trouble.  I had a couple of fish that smashed up my rig and I was quickly going through my shallow rigs that I had set up.  I also got snagged up in the tree a few times, much to the amusement of Stuart and Paul Law opposite me.  Which net do I put the squirrels in??? ;-)

With all my shallow rigs smashed up I decided to drop the method feeder in the right had margin.  this resulted in 4 more carp.

The all-out was called and I had 36 fish on my counter, estimated around 50lb.

The Result
55lb something, beaten by some great paste angling from Colbrad next door.  It was good enough for 3rd in section and also beat Mark's weight so I've now take a 3 point lead in our mini competition.  It was however time to give Barry his pound back as he battered my weight!  Unluck to Steve who's keepnet had dropped in before the the scales came round in which he had around 15 fish which would have pushed me to 4th in section.  A lesson to us all there!

Conclusion
I need to learn how to fish paste!  I don't think I would have changed the match plan, maybe have a 5 metre line in addition.  A great day with some fantastic weighs around the lake.  Congratulations and thanks to Neil for organising and winning the match with 170lb!