August 10, 2015
A good friend and work colleague Dugald Henderson has just retired from working life at Shell so we all decided to descend upon Dugald and his family at their home in the Isle of Wight.

So why is this on my fishing blog?  Well, Dugald being a great sport and agreeing to let 9 of the team including families stay at there magnificent Grade II listed property on the Isle of Wight had also organised a full weekend of activities for us which included a half day out on the water with Rob and Black Rock Charters.

Now I'm a little bit prone to sea sickness so I was filled with joy and trepidation for the chance to catch some fish of the back of a boat.  All precautions where taken including a very early alarm call to take my pills two hours before the charter.  Believe me, after a night with the Henderson's, free flowing drinks, that was a very tough call!

We all gathered in the harbour at 8am and were warmly greeted by Rob and permission was granted to board The Alaminta, but of course we needed a group photograph first!

Rob gave us our safety briefing and we were off for a 25 minute trip to Milford where we would be fishing in around 14 metres of water.

Bait for the day consisted of freshly caught mackerel strips, squid and sand eels.  We were using Penn rods and multipliers which were loaded with 45lb braid to a simple running plastic boom rig with a 2-3 foot hooklength of mono-filament and size 2/0 hook.

Arriving at our fishing spot, Rob dropped the anchor and we were soon fishing away.  The sea was very calm, which helped any thought of sea sickness disappear from my mind, or was it the pills?

The tide was quite strong and we were using heavy weights to get down on the bottom.  With the tide running through it also brought a lot of weed and we were having to bring our rigs up to clear them of seaweed and to clean the bait too...  For the first 90 minutes, we remained biteless, until the tide started to slacken.

With the slack tide we switched to a lighter lead weight and the bites soon started to come.  The first fish onboard was a shad caught by Karina.  It was a little undersized so it was released unharmed.

Dugald then caught a lovely Thorn back ray and then next put in a beautiful Undulated Ray both of which we put back.

The action was pretty frenetic in the slack tide and now it was my turn, the smallest of knocks on the rod and I struck, it was clear that I had a good fish on, after a brief struggle Rob landed my first ever Undulated Ray, weighing in a 10.5lb's.  What a beautiful fish it was!  As they are protected, we realised her back into the ocean.

Everyone was catching on the boat and Ronald was bringing in some lovely black bream which we quickly dispatched as they would be breakfast tomorrow.

Dmitry was getting a lot of bites but not hitting the fish, until he brought aboard the largest of the black bream.

Rembrandt and Bart-Jan also added to the catch with some more shad or horse mackerel.

The group also fancied a spot of mackerel fishing, so Rob tackled up some lighter rods and we steamed back towards port and some drift fishing.

We were in deeper water, around 40metres and under Rob's instructions we let the small lures strung out on the line down for around 7 seconds and then jigged the rods.  The bites were unmistakable with the rod shaking about.

4 mackerel came in on the first rod and they were of a good size, these would be smoked for our lunch when back on shore.

After around 20 minutes of mackerel bashing we had a good catch of around 14 fish and we headed back to the port.

What a great morning we had with Rob.  A very patient and knowledgeable skipper with a passion for the ocean and it's bounty.

Thanks Rob for a great morning and happy retirement Dugald!  We'll miss you in and around the office, but we know where you live now and will be visiting more often! 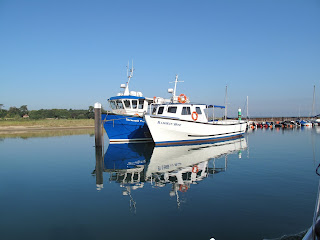