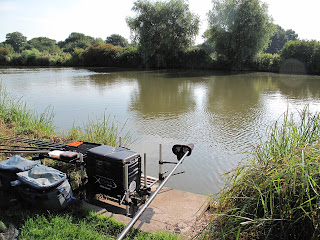 The final day and the Munkees have it all to do today in order to claim victory.  The night at the Longshoot was quiz night and one team named themselves, "Munkees Nil"... that was a Shandie team.  There was plenty of cheating going on with google and shazam but hey we'll ignore that.  The highlight of the night was definitely the quiz masters version of Bruce's Play Your Cards Right.  Poor guy had to content with very loud cries of "higher", "lower" and "you get nothing for a pair in this game"!

Those leaving after the quiz were all given a warm, "Good byyyyeeee" by the lads!

Again, Pool 1 was were most wanted to draw and weights yesterday on the other pools were still down.

The Draw
I drew for Sconey and managed to bag him a peg on Pool 1.  My home for the day would be pool 4, peg 73 which saw a low weight of 30lb yesterday.  My Shandie match up was with Andy Day.  It would be a tough ask but I'd give it my best shot for a Munkee point.

Set-Up
I spoke to Andy Kinder about the peg and he mentioned it was not a known feeder peg but that the 5 metre line and margin should be ok so the feeder rod came out again and I set up a line for 5 metres and 14.5 metres (shallow and full depth).

The margin line wasn't ideal, but I found a nice shelf using the top two.

All-In
Starting on the 5 metre line to try and mug a couple of fish which took around 15 minutes before the first carp came to the net.  After 30 minutes I only had two carp, so decided to swap to the feeder and ping pellets over the 14.5 metre line.

A couple of fish on the feeder, mainly silvers, so I gave up on that line and went out to 14.5 metres with a banded pellet which after 30 minutes resulted in one fish only...

With a few hours gone I didn't have a lot to show for my efforts so back on the 5 metre line which ended up producing fish.  This line got stronger during the match.  Andy didn't have any luck on the pellet waggler, so mine stayed in the bag too.

The fish I was getting on the 5 metre line were good weight builder and I managed to catch a large 7lb mirror.  I was going back on the line when a large carp came cruising out of the margin so I dropped my rig in front of it, but it disappeared.  The float settled and then buried with the black hydro stretching out with the regular thump of a large fish!  Getting the fish to the surface it was that large fish from the margin.  The first attempt at netting it, I missed and the fish steamed off.  Finally I got it back to netting range and disaster, the line broke just below the bulk shot!  Oh dear.

Priming the margin with sloppy groundbait I would have a look and see what was there.  The float buried and a large carp was on and soon in the net.

The final hour of the match I fished the margin and managed to take four good fish from it using double worm as hook bait.

Andy had been catching in the margin too.  With the all-out I didn't really know what my weight was, but I knew I had around 70lb of fish but I didn't know what Andy had.

Result
90lb 12oz which given the low weights on the previous days I was very happy with but credit to Andy who beat me quite convincingly with 116lb 8oz.  Well done matey.  A Shandie victory.  Pool 4 ended up 2-1 to the Shandies. 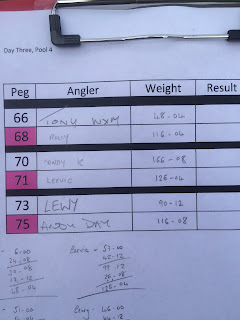 Conclusion
The 5 metre and margin lines really saved my day.  Given the previous poor weights I was very happy with my weight despite being beaten to the point.

A fantastic three days and a massive thanks to Roy Marlow and Sconey for the use of the Glebe and organising another great Munkees vs Shandies.

Well done to the Shandies for taking a convincing win!  Thanks to Calum for the cake, do you ever work mate? ;-) 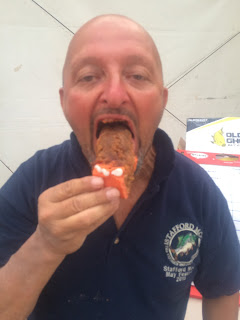 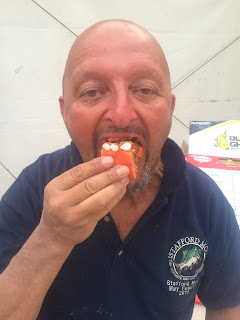 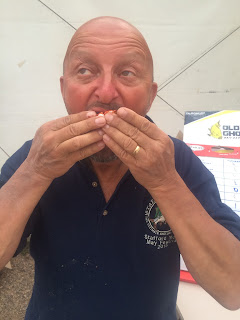 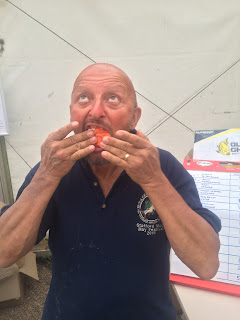