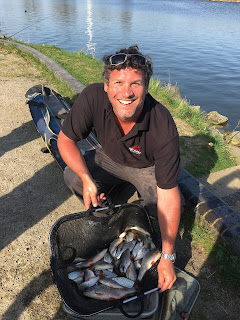 A new venue for me popped up on the Match Fishing Scene website, Boddington Reservoir.  It was a silvers match and I'd heard that there was a big head of roach so I popped my name down.  The weekend weather was shaping up to be quite a scorcher and the temperature was rising as I drove towards Northamptonshire.

The Draw
My milk bottle top had the number 43 on it.  We had heard that the pegs you wanted where the higher numbers.  Neighbours for the day, George, Les, Pikey and Shedders.

Set-Up
The waggler rod was first out of the bag setup with a 4AAA Nick Gilbert waggler.  Pole lines all straight ahead using a sailing buoy as my marker were:

The previous night I'd swapped out my top kits to a 1-2 solid elastic.

Bait was all natural and simple, casters and maggots.  Groundbait I bought some light coloured Roach X and supplemented it with some dark sweet fishmeal.

There was quite a lot of tow and chop and the waggler was moving through the swim quite quickly.   It took about 20 minutes and a few cast before the first bite and there was definitely an area that appeared to be to "killing" zone.  Soon enough a pristine roach was in the net.  George and Les were also catching on the waggler but their catch rate was a lot higher than mine.

After 40 minutes and 3 fish I switched to the 7 metre pole line which started to produce more fish.  The bites were very clear indeed with the float shooting straight under and the fish certainly didn't appear to be hook shy at all.

I'd been dripping in casters on my short "stairs" line, after seeing Les catch a few short I switched to this line.  My rig had the shot strung out to try and figure out where about in the water column the fish where.  It was quite clear the fish were nearer the bottom so I adjusted the shotting pattern to a bulk with two droppers and my catch rate improved significantly!

This line definitely changed my match result as I was trailing Les and Pikey.  Les catching short and Pikey catching well on the waggler.  The man can use a rod and reel when he wants too ;-)

When the short line slowed down I fed a nugget of groundbait and went out on the waggler over the 13 metre line constantly dipping in casters short.  After about 10 minutes back on the short line and repeated this until the end of the match.

The short line was producing fish very quickly about 10 fish in quick succession so I changed the shotting again to a single bulk, ultra positive which again produced more fish.  A change of hook length after I lost some fish put me back in touch with them.

The all-out was called and I'd fed 2 pints of casters and almost all of my maggots!  I was looking forward to seeing the net of fish as it had been a bumper day!

Result
16lb 3oz of immaculate roach including one perch.  6th in section and 12th overall.  Having to give a pound to Les and Pikey although I did get my golden nugget back from Shedders after the Barston loss.

Well done to Daddy May for an impressive 41lb for the match win, a great net of roach!

Conclusion
Should I have tried short earlier?  Well, yes if I'm honest.  I also felt I fished the waggler to far out initially as the waggler on the long pole line was far better than casting to the horizon.  The wind definitely played its part today as in the later stages of the match the wind would drop and the ripple would be lost which in turn the fish seemed to turn off.

Single live red maggot was the best hook bait on the day.  Casters produced the same quality of fish and white maggots the bites were a lot slower.

A great venue with plenty of action throughout the day!  Thanks to Hathers for organising the match, I look forward to the next one!

**Update.  After speaking with that font of knowledge Andy Gregory the reason for my lost fish was the fact that I had too light an elastic on and it simply wasn't setting the hook.  Great tip thanks Andy!