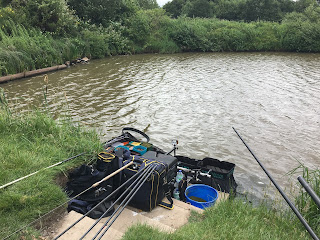 Day 2 after a quiet curry night in Bosworth with Herbie, Daddy May, Colin and Rolly.  We did arrive at the Glebe and got the appropriate abuse for not visiting the lads at the Longshoot.

Glen was telling everyone the story of the multiple coach roaches in his room.  "I know the place is a sh*thole, but this is just too much" he told the night porter.  The Longshoot isn't the nicest place to stay however the craic in the bar with the lads is fantastic!

The Draw
So today I'd be drawing for a peg on Pool 4, 5, 6 or 7.  After my experience at the Glebe with Pool 4, it was the last place that anyone wanted!

Hand goes into the bowl and yes, you've guessed it, Pool 4!!! but peg 66 in the corner.  Company on Pool 4 would be Pikey, Pete Bailey, Shaur, Drawbag and Kenfish.

Set-Up
Corner peg so the left hand bank would be targeted at multiple locations. Other pole lines were at 5 metres and I also set-up a shallow rig just in case.

The feeder rod was also set-up to target the far bank.

All-In
Half a cup of sweetcorn and groundbait on the 5 metre line and straight onto the feeder.  The first feeder chuck went squirrel hunting and eventually I found the spot and a fish came straight away.

Pikey was fishing his normal paste at 5 metres and already had two fish in the net!  The first hour past with not many fish coming from the feeder line so I ditched that option and tried to find the fish around the left hand margin.

Fishing at around 13 metres with a piece of corn and kidder potting in corn towards the end of the log barrier (you can see it on the picture above), I started to connect with the fish.  Sport wasn't lightning fast but I was getting bites and landing fish.

Mid way through the match Pikey had switched to the bomb and pellet and was bringing fish in regularly.  The man can fish with a rod and line, its not a myth!  My margin line was producing at the same rate so I changed the feeder rig over to a bomb and copied him.  This worked for me although Dave definitely had the edge as the fish seemed to be lining up to take his pellet.

The final few hours and after priming the extreme left margin with groundbait I felt it was time to try for some bigger better margin fish.  I'd seen a few of them cruising around that area.  Double worm on the hook, a heavy rig and plenty of groundbait I fished until the all-out.

The fish were of a better stamp and I even landed a lovely bream from the margin too.  At the all-out I knew that Dave had certainly beaten me (again!), it was dependant on what the other lads had done further up the lake...

Result
82lb for 4th in section!  A section of death with Josh, Pete Bailey and Pikey who all beat me quite convincingly.

Conclusion
Dave's bomb and pellet line did most of the damage against me.  He was landing fish at an alarming rate, including one double figured fish that was foul hooked but expertly guided to the net.

I didn't think I'd made the most of my corner peg advantage and to be honest struggled to think what I should have done to improve it.  One area I didn't explore was tight against the boards and I left with that nagging feeling of "why did I try it"...

A great two days kindly supported by Neil of HillBilly floats.  Thanks Neil! 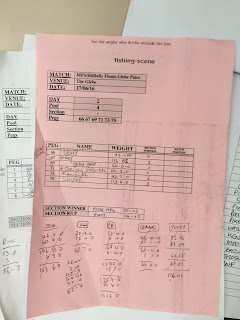