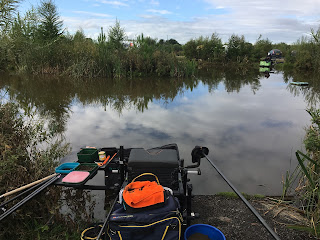 A trip to Manchester to see all the North West lads and another new fishery to try out.  Jim Manc had organised a small match at Moss Farm Fisheries in Irlam, Manchester.  Now the journey from London would have been quite a long one so I decided to travel up on the friday and join some of the lads for a curry in Media City.

Friday isn't the best day to be travelling and so it took me a long 5 hours to trek up from the countries capital however a great night was assured and to top that Herbie had organised some top accommodation for us both!  Cheers Herbie.

The next morning we all gathered at the fishery were we where treated to a great breakfast although I didn't go the whole hog as I was pretty full from the night before!

The Draw
Today we were on Madison's lake, yes it sounded like a nightclub from Middlesbrough to me however all the lakes were named after ladies.  The fancied draws were most definitely the corner pegs.  I was lucky enough to be first to draw and peg 1 would be my home for the day and a corner peg at that too with a bonus of being able to park right behind my peg!

Set-up
I could not reach the island with the pole as it was around 19 metres away so I opted for three pole lines:

Pete Merce came round and gave me a mini guru method feeder as I'd forgotten to bring my feeders so I quickly broke out a rod and clipped up to the far bank.

Bait was pellets, maggots, chopped worm and corn with some groundbait for the edge.

All-In
As it was a new venue I started with a negative approach to feeding.  My 2 o'clock line I fed with a ball of groundbait and chopped worm and my 10 o'clock line I kinder potted in some chopped worm and fished straight over the top of it.  On my third put in on the kinder pot line I hooked a lovely little stocky carp.  After an hour on this line getting some very odd bites which showed that the fish weren't on the bottom and I'd managed only two fish so I had a look on the groundbait line which didn't give me anything...

The reeds on the far bank were being bashed about by some carp so my thinking was to feed my long pole line heavier to try and get the fish settled on the deck while I fished across on the mini method feeder.

The bites on the method feeder were as expected pretty savage with the tip flying round however the fish weren't settling across, another hour passed with only a few more fish in the net.  I thought about switching to a bomb and pellet across while pinging pellets although I stuck it out on the method feeder packed with micro pellets.

Mid way through the match I just couldn't get into a rhythm and was trying my pole lines and method line rather than concentrating on a single approach which I felt didn't help my final weight.

A lovely chunky crucian carp came on the pole line together with some cracking little tench, clearly the worm line was a lot more productive that the groundbait line.  The run of fish never happened.

A look in the margin after priming it with a small amount of groundbait only produced perch, small ones at that!

The all-out was called, so I went to unclip the method rod and managed to snag the aerator line subsequently loosing Pete Merce's mini method he'd kindly lent me... sorry Pete..

Result
15lb 5oz for a section 4th.  Congratulations to Baz Wrexham for blitzing the match with 54lb!

Conclusion
The far bank was the key.  I could see Baz Wrexham shipping over and hooking fish all day long.  My method line just wasn't producing the fish as quick and the reeds were constantly knocking all day long.

Another angling friend commented to me that they normally fish in the centre of the channel at half depth pinging maggots over the float and catch plenty of stocky carp which was a method I'd not thought about.