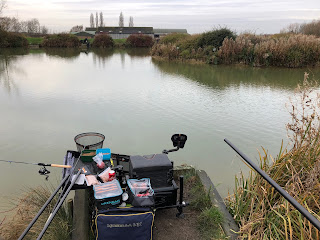 The last match of the year for me and an outing to Lawn Farm near Cambridge with the Facebook Angling League guys.  Lawn Farm has been quite kind to me this year although the very cold weather lately made me think that today would be a tough day.

I'd pinged Amer Jawad who is a regular at Lawn Farm for some advice as I'd not been on the bank for a few months to get some tips.  Amer certainly helped my day, so thanks Amer!

The Draw
A couple of no-shows, although the best no-show was Glen who thought the match was on the Sunday, not the Saturday!  Luckily Paul Law who was getting a lift from Glen arrived with another angler.  On the plus side at least Glen didn't turn up at some ungodly hour at Paul's place on the Sunday!

Peg 27 came out the bag for me which I was happy about.  The peg is on the spit at the back of the lake and gave me open water and the island to go for.

Set-up
Peg 27 happened to be Amer's favourite peg so the advice that came through I followed almost to the letter.  Feeder to the island about 2 metres short to try and pick up a bonus chub and the pole at 11metres for the skimmers and pole at 5 metres for the roach.

As the water level was down substantially and the water was gin clear I decided to go to 13 metres on the pole line and to ditch the 5 metre line.  Depth was around 9 feet, just over the top kit.  I picked two lines and luckily the lake is pretty even in depth so the first line was straight ahead and the other towards the island.

Bait, all natural selection of maggots and casters with some sweetcorn to try and tempt the larger skimmers in the lake.  Groundbait consisted of F1 sweet fishmeal although I didn't mix much as we knew the lake was fishing hard so it would be a negative approach today.

All-In
One ball of ground bait with a smattering of casters and dead red maggots on each pole line and out on the feeder to let the pole lines rest.

The feeder I was using the smallest Guru cage feeder filled with ground bait only and double dead red maggot on the hook.  I started casting every 5 minutes to try and get some attention in the area however after 45 minutes the tip had remained stationary.  Grabbing the catapult I tried to feed some casters long but I could reach and in fact sprayed the 30 odd casters everywhere!  Carl on Peg 14 commented that I'd fed quite a few swims with that attempt.  The catapult remained on the side tray after that! 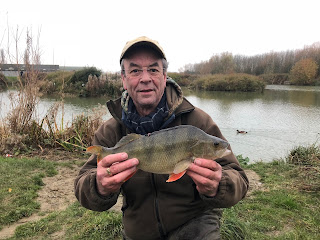 So an hour in and nothing in the net.  The whole lake was fishing hard with very little being caught around me.  Time to try the pole as the feeder line wasn't working.  Starting on my left hand line with double dead red maggots initially with a strung out set up the float settled and nothing at all... working the line eventually after 90 minutes the float dipped and it was fish on which soon turn to fish off!  Rebaiting I bumped another fish so I decided to bulk the shot up and have two number 10 droppers.

Simon Pavey next door to me hooked a really good fish which we thought was a carp until it surfaced, it was a large perch that was netted.  The fish went 2lb 4oz on the scales and it was a great start for Simon.

Trying my other pole line I finally hooked a skimmer and I was off the mark after 2 hours in the cold. The pole line had finally come alive and I took some better skimmers in the next 30 minutes from that line and then the roach arrived so I decided to have a quick look on my second pole line with some sweetcorn to try and tempt the larger fish.  It worked and I took 4 more decent skimmers.

I decided to top up the pole lines after the micro roach where homing in on the bait so another small ball of groundbait on each line and a quick spell on the feeder to let them settle.  30 minutes on the feeder and a small perch to show for my efforts it was time to get back on the pole lines.

Carl called the all out, at least I could get warm again while packing up the gear.


Conclusion
All of my fish came during an hour around mid day, topping up the pole lines definitely killed it off so the questions I had for myself was should I have put more balls in at the beginning of the session to hold the fish for longer when they turned up?  My thoughts on this are that I should have fed one line heavy and the other line negative giving me those options.

Fishing off my feed didn't produce anything either.  Chatting to the other lads it appeared that the pattern I saw was the same there was a spell of around an hour when people caught and the rest of the match was pretty tough.

Due to the depth of the peg and while I had a kinder pot on my side tray my thoughts were that kinder potting in wouldn't have helped the situation.  I did ping some casters over the lines at intervals to try and get some action.  Paul Law did kinder pot in to get the roach and skimmers back in, so in hindsight maybe I should have given it a go.

We knew the weights were down during the past couple of weeks and that it would be a tough match but hey, thats winter fishing for you.

Overall happy with my section and lake second overall picking up a brown envelope for the section and super pools. 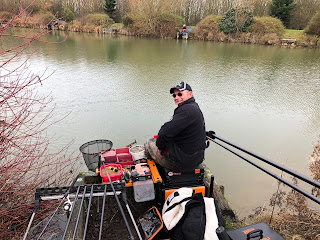 I had the same with the refeed it seemed to push the fish away, however I started toss potting maggots over the top and a few come back roach first followed by small skimmers and managed to get the odd bite until the end.
4 December 2017 at 13:07