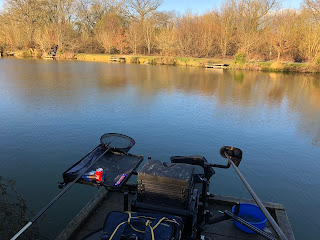 Another opportunity to get some silvers practise in before the 'Moor and back to Sumner's fishery with Hathers and crew.

After learning from last week, the match plan today if the peg allowed it, was to have a single long line that would be fed heavily from the off and left to settle, a waggler line and 5 metre line for the roach.

Today's weather was pretty horrid and the car was showing 2 degrees as I arrived at the fishery.  The wind was a nasty north easterly and blowing straight down the lake.

The Draw
Peg 12 which is permanent peg 21 the far end of the right hand bank and today somewhat sheltered from the wind. 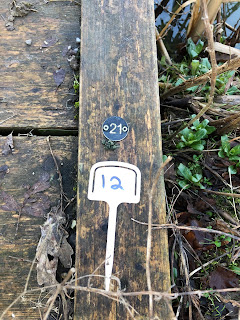 Set-up
As per the match plan 14.5 metre pole line straight ahead towards the peg opposite.  Close in lines to 5 metres including a margin line and the waggler rod out of the bag.

Bait list today, maggots (red/white) and casters including some ground bait for the long line.

All-In
Hathers came round to collect his peg markers and with all the other anglers ready the all-in was called at 10am, just as I'd grabbed the waggler rod out of the bag.  I cupped in 5 balls of ground bait on the long pole line laced with a large potting cup of casters.

The depth in this peg was around 3.5 feet which was a worry given the cold weather.  Waggler rod quickly setup and dotted down, thats the beauty of loaded wagglers for you.

Starting on the 5 metre line flicking some casters in and a single red maggot on the hook, nothing at all.  In fact nothing on the waggler or short line for the first hour!  It was similar around the lake to be fair.  Finally the float dipped close in and elastic slowly started to cross the lake in front of me, definitely the tell tale sign of a carp and after 15 minutes it turned out to be quite a monster, landed on 0.10 hook length to a size 20 hook!

The lake was fishing very hard and the first silver arrived at 1:30pm on the waggler.  I was thinking of packing in and going home but the first fish meant I had to weight in.  Unfortunately Malcolm next to me had also been bite less and was now packing up.

Herbie across the way had finally landed a fish so here was the main competition ;-)

The wind was gusting now making the long pole pretty unfishable so in order not to waste the line, the small feeder rod came back out of the bag and clipped up to 15 metres.  Fish cast on the line and the tip flew round with an angry but rather fat mirror carp gracing the net.

The short line was producing nothing at all so I decided to stick to the rods and fish the waggler around the peg producing another two silver fish.  Herbie had a few more better fish and Silvers further down to my left was catching some small roach.

With 30 minutes to go I could see the odd bubble on the 14 metre line.  The waggler dipped and finally a skimmer on the line, only to come off half way back, was that my only chance?

Next fish was yet another carp and then finally a small skimmer before the whistle.  Four fish for todays effort!

Result
12oz for a section 5th with three anglers registering a DNW.  Congratulations to Sam Docker with the overall win with 12lb 12oz.

Conclusion
Eight carp hooked, some landed so I was clearly in an area where the carp had balled up which really didn't help matters.  Today really demonstrated how much effect the weather has on the fish with last week producing some great weights of roach and this week those same pegs producing hardly anything.

The depth of my peg was too favourable given the conditions as normally anglers run to these pegs during the milder weather as they are know for some great weights.

Another great day out with the lads now time to get the gear ready for Stafford Moor!  'mon the moor as all the lads say.