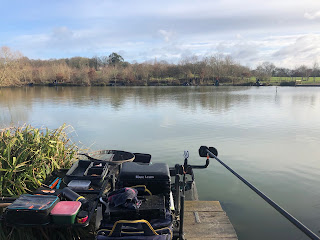 I joined Godalming Angling Society at Sumners Match Lake near Horsham today. Twenty anglers arrived to quite a cold and windy day.

Today's match counted both carp and silvers however there was also a silvers pool, draw depend would shape my day, I aslo wanted to use the day as further silvers practise for Ricky Baxters Silvers League.

The Draw
Permanent Peg 4 in the bowl was my chosen peg for the day, which was also the end peg. I'd fished the bowl previously so I was definitely starting to think that my carp match was not going to happen.

Set-up
I grabbed a feeder rod that was setup with a modified method feeder and some pole elastic to carry a PVA bag of pellets and a white wafter for the carp.

Pole Lines where:
Bait was very simple, casters, maggots together with some groundbait just in case the carp or even larger skimmers moved in.

All-In
I had to start the match and try to find a carp, so the feeder rod was the logical first attack with a PVA bag and white wafter this would be a 15 minute cast towards the centre of the bowl. First I fed 4 balls of groundbait on the 12 metre pole line with zero feed content, a trick that had worked on other waters over the past couple of months.

The 15 minutes elapsed without even a line bite however the time was not wasted as I had started to drip feed some casters on the whip line ready for the roach close in.

The whip line produced straight from the get go... small micro roach mixed in with some better stamp fish of 6 to 10 oz. White maggot seemed to be the better bait and flicking the rig past the feed and following the float out with the whip was when these better fish were caught. With the fist 90 minutes of the match gone, Henry down the lake was certainly on for a good weight as he was catching large carp from his peg mainly using waggler to the island tactics.

The whip line started to drop off so it was time to check the long pole line. The groundbait didn't have any food offerings and I didn't want to introduce any loose feed. The firs five put in's resulted in 5 small roach. So I switched to the margin line in the hope of some more decent silvers. This was not to be...

Back on the whip and I start catching well which I managed to fish for a further hour before it dropping off. It did occur to me that I'd effectiviley rested the whip line for around 20 minutes for it to produce again. So, what could I do to catch quickly? I quickly plumbed up a new line at 5 metres on the pole, off to the right of my whip line and started getting the silvers again which I fished for around 30 minutes and then back on the whip.

I repeated this process until the end of the match although not before catching a 3lb mirror carp on the non elasticed whip! 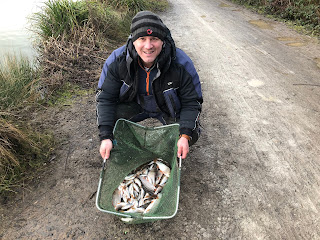 I did attempt to feed the margin heavily with groundbait for another carp which I hooked and after 10 minutes came back with a single scale obviously a foul hooker.

Result
11lb 2oz of silvers, including the carp a total of 14lb 4oz. Henry absolutely blitzed the match with a fantastic 164lb of carp together with 14lb of silvers including two large barbel! Top angling Henry!

Conclusion
The whip line produced well, I just need to be able to rest it and get another line producing good silvers too. Mark on the peg next door to me also had 11lb 2oz of silvers that he had taken on the waggler.

My next match the plan will be whip, 5 metre lines including the margin and a waggler. Next stop back with Farnham Angling Society and Kings Pond.
Godalming Angling Society Matches Sumners Fishery