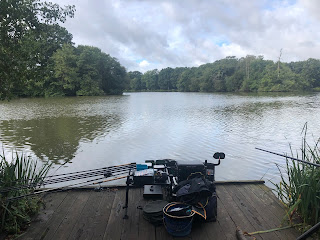 A late call went out on the OBH Lovers group on Bookface that there was a spare place on the match.  A quick phone call to Hathers and I'd secured the spot fishing as replacement for Steve Parkin.

The Draw
8:15am draw, I arrived around 8am to find the front bank parking full. The lads were obviously keen today!

Set-up
After watching Greg an Simon casting out a very long way to clip up their rods I followed suit.  After clipping up I marked out the distance on the measuring sticks at 70 metres!

I set-up a bomb and pellet rod at this distance that would have a t-bag of pellets with it.  I also set-up a feeder rod at 25 metres, just beyond the pole line.

A single pole line at 13-14 metres at the 1 o'clock position to avoid bring fish on the feeder line over it with a light 0.4g rig and heavier 0.8g rig if the wind got up.

All-In
The weather today was screaming Bream!  Overcast, quite choppy water, it certainly made me think positively.  So with the all-in I put 4 balls of ground bait laced with micro pellets, dead maggot and sweetcorn at 13 metres on the pole line.  I also put some large feeders on the 25 metre line.

I had decided to start with the bomb and t-bag approach however with the wind getting up I was finding it hard to hit the clip.  After an hour together with 10 minute chucks I had a three skimmers in the net using an 8mm pellet.

Greg next to me had started to catch on a regular basis too, chucking between to the gap in between the trees.  Simon wasn't having much luck however and didn't we know about it ;-)

Giving myself 30 minutes with 5 minute chucks I kicked off the 25 metre line and snared myself a lovely bream of around 4lb in the process.

Greg and Simon where using a hybrid feeder together with a wafter, clearly I was using the wrong method so I broke out the 13ft rod and quickly rigged up a 55g Guru Hybrid feeder and went about 10 metres longer.  The change was almost instant with the rod almost off the rest after a couple of minutes.

I was picking up fish on a regular basis and had around 20 fish after three hours.  Greg was on fire however literally a fish a chuck at one point before the feeder had chance to settle! 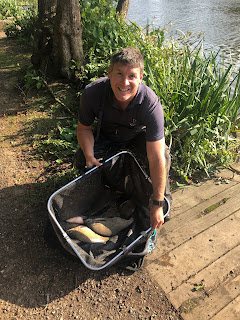 After hour three things started to slow up so I decided to have a quick look on the pole.  The pole rigs were set over depth as the wind was gusting through making holding the pole quite difficult.  I had also forgotten to bring my bump bar!  Five fish in five chucks on the pole falling to a lump of sweetcorn.  The bites were pretty savage too, with the float shooting under.

With the wind getting up I decided to drop a small bomb just over the pole line with sweetcorn.  The fish had backed off slightly and a couple of fish came to the net however I was keen to get back on the long feeder line.

I ended up fishing the long feeder until the end of the match as the line got stronger and I ended up borrowing a net from Swanny as I hadn't been counting the fish and there was a strict 40lb net limit.

The all-out was called in the most polite way... "You may all stop fishing now" called Hathers... Knob! ;-)

Result
61lb 8oz for section second behind Greg who was the match winner with 99lb despite loosing five fish by dropping a keep net in the water!

Conclusion
Watching Greg next door, switching to the hybrid feeder and going longer changed my match for the better!  The wind hampered the pole line which was a great shame as I was catching well on it with five fish in quick succession.  Overall another quality day fishing the long distance feeder at Bury Hill, after all, who doesn't enjoy a good long chuck with regular positive bites!


I even grabbed a pound back from Simon! 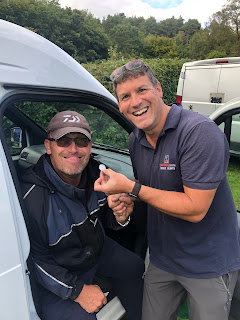