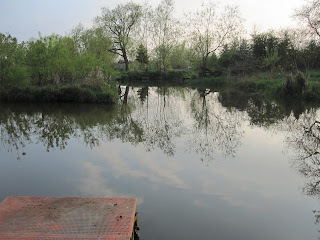 The sunday we decided to fish Top Pool at Tunnel Barn Farm Fisheries.  Again, Les from the tackle shop gave us some great advice and told us to fish at Pegs 1 through 7 as there was a match on the rest of Top Pool.

I selected Peg 1 and Mark, Peg 2.  Mark's aim for the day was to further his pole fishing and he was planning on sticking with the pole for most of the day... well, it didn't quite go to that plan, but more later.

Peg 1 was a lovely looking Peg with reeds in front reachable at 13 metres, a large margin swim on the right and open water straight ahead.  Plenty of options here and the weather was going to play a part in the days fishing.

So, my tactics where to get the pole across to the reeds as tight as possible, also have a swim a metre from the reeds and a margin swim.  It was also an opportunity, should the fish play ball to get the pellet waggler rod out for the first time.

Starting the session off I took an early F1 from my 12 metre reed swim and then started to struggle for bites.  It was the same for Mark next to me and also a guy who had pitched up on Peg 3.

The fishing was quite unpredictable and frustrating at time, maybe the warm weather was to blame?  I noticed that some larger fish were cruising at distance in my peg, so started to flick out 3-5 pellets to try and get them feeding and feeding they did.

So out with the pellet waggler and wallop, I landed around 10 good F1's and Carp in no time.  This was then bettered by a larger Carp falling for the same tactic, all 10lb 4oz of her. 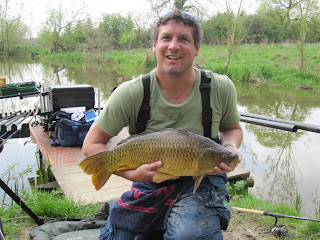 Mark switched to the trusty feeder and started to really bag up, my pellet line was producing the odd fish but not at the same speed as earlier so I rested it and went lurking in the margin swim.  The margin was taking some fish, including a small barbel but certainly not a the rate Mark was catching on the feeder, so in order to protect my potential win for the day I pulled the feeder rod out.

The action was non-stop for both of us, the bites where taking the rods off the rests and it was almost a fish a chuck.

We finished our Sunday session looked at our catches and estimated we had about 55-60lb of fish each.  Mark kindly gave me the win but he was catching up fast.  So, the scores are now Mark 7, me 6, leaving me one point adrift.

Here are some photographs of our nets at the end of the Sunday.  A big thanks to Mike and Les at Tunnel Barn Farm, we had a great stay and I'm looking forward to fishing the match in May. 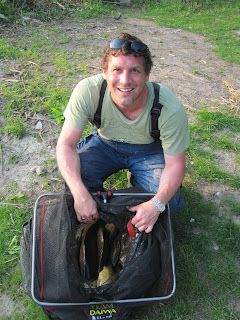 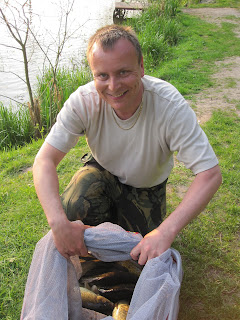