May 11, 2011
After following Phil Stones blog to build How End Fishery on the MatchFishing-Scene website/forum I really wanted to go and visit the fishery soon after the opening day.  It was also a good opportunity to let Mark build on his pole fishing skills.


We arrived at How End at 7am, but I didn't realise that Phil opened at 8am... oops, a quick phonecall to Phil and he came down a short time afterwards to greet us and let us in.  A very short drive into the fishery and the all important first impressions are a job that has been done by a perfectionist.  Phil was very welcoming so we had a chat about the fishery and amongst other things I confirmed that he is a petrol head too... perfect!

Mark and I decided to fish Yasi's Lake as it is more pole orientated.  The car park is very close to both lakes, so it's only a small walk to the lakes  The swims are very good, proper concrete slabs and enough room between the anglers.  We decided to fish the swims on the point of the island at Yasi's next to the disabled angling pegs.  I didn't snap a picture of the peg unfortunately, so I grabbed this image from the How End's website.

We fished on the left of the picture.

The Session
Setting up, Phil came over and gave us some pointers about the make up of Yasi's topology.  Inside shelf three feet deep, shelving off to six foot for the track and shallowing up to two foot over near the island.  The fact that this lake has been precision dug allows you to exploit multiple swims both in front of you and to both sides.

Phil also mentioned that it was worthwhile plumbing up, finding and fishing half way down the shelf.  So I plumbed up three lines initially, inside margin, one down the track and one on the far shelf (mid way down).

I cupped in a small amount of fishery pellets along with some red and white maggots on the far line and started fishing.

Meant time, Mark was still setting his pole, but he couldn't find his number 8 section... horrified as he likes to look after his gear, how on earth could a number 8 section go missing? We surmised that he had probably left it at Tunnel Barn some weeks early... so Mark was not off to a good start as he couldn't quite reach the far shelf.

Post blog update: Mark found his number 8 section... guess where?  Yes in the butt section of his pole... d'oh!!!! 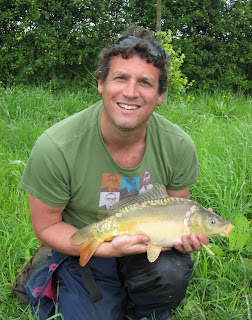 The bites took some time to materialize, but the first one produced a perfectly formed small barbel that managed to give the Daiwa Hydro Blue a good tug.  Next put in, another barbel, I then topped up the swim with the toss pot and the barbel had obviously moved in...another couple of barbel later, the float dipped with the single red maggot bait and the elastic zinged out of the pole, I wonder if I'd connected with one of Phil's monsters...  5 minutes later this beautifully scaled and formed carp found the net.

I was over the moon.  Mark was slightly dejected as he could see him loosing that vital point in our "friendly" competition. ;-)

I topped up the far swim and decided to give the track a go, but to no luck.  In between baiting my pole and grabbing a cup of tea I dropped my rig at my feet, the float shot away and I brought a lovely perch to the net, even better when Phil told me there were only 12 perch in the lake... bonus!

Mark decided to go to his trusty feeder rod and quickly tamed two of the smaller carp.  Seeing this I rigged up a shallow rig for the far shelf, put some corn on the hook and quickly caught two lovely small common carp, again perfectly formed!

The weather was lovely, but the wind was gusting, making fishing a long pole a little awkward so I decided to fish the left hand margin.  Regular feeding of caster and fishing double white maggot saw skimmers and ide coming to the net.

Phil came round as we were packing up, I'd secured the win over Mark and the scores are now 8-7 to me.  I had a nice bag of around 25 silver fish (Roach, Ide, Skimmers, Barbel and one Perch) and 3 carp in total.

Phil's done a great job of How End Fishery, It will look even better when the grass starts to grow.  Next visit I'll fish Dani's lake.

Closing comments, what a great venue to have in your back yard, great job Phil, looking forward to seeing the venue grow from strength to strength!  Thanks for making us so welcome.
How End Fishery
Location: Houghton Conquest, Bedford, Central Bedfordshire MK45 3JT, UK