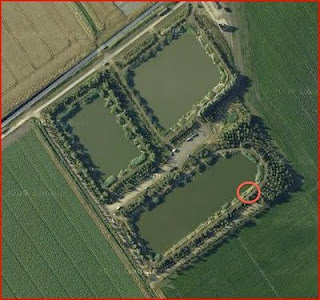 Heading back down to London after the Messingham Sands match I decided to drop in to see my mate Mark.  We decided to fish Kingsland Reservoir in Coates, near Peterborough.

Kingsland Reservoir consists of three lakes, two with carp and one silver fish.  The fishery opens at 7am and we arrived early, 6:30am to find a queue already forming.

The owner, Richard, very friendly man gave us some good advice and informed us that a match was going to be fished on the lake we wanted to fish and he gave us an alternative area.  We picked up the fishery landing and keepnets and headed to our chosen spot.

It was quite overcast and windy so fishing a longish pole was out the question.  The two lines of attack I chose was a 5m metre line and method feeder towards the aerator.  Mark took the swim along to my right which gave him a better opportunity for fishing the pole and a larger margin swim.

I was about to kick off my swim when Mark called over that he had a fish on and needed some help.  This is Mark's second session on the Pole and he just needed a little guidance.  5 minutes later he landed a lovely Mirror Carp, a great fish to really christen his pole fishing. 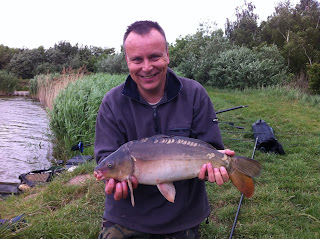 So Mark was off to a flying start.  I got back to my swim and kicked off the 5 metre line.  Bites didn't take long.  Plenty of stock carp came to the net, feeding maggot and fishing pellet kept them coming, but nothing of size.  I fed the margin swim on my right from the off with 6mm meat and corn.

I switch tactics to the method feeder out near the aerator with a large 11mm pellet as hookbait.  The tip soon went round and I was into a better stamp of fish than the 5 metre line.  I then managed to get a nice mirror carp to bring me around level with Mark.


Mark was bumping quite a few fish on the pole and also went on the feeder.  I decided to drop the method feeder into my margin swim.  The tip went round and a large fish was on, before I had time to disengage the anti-reverse and back wind the drag went.  The fish steamed off and the hook length broke. 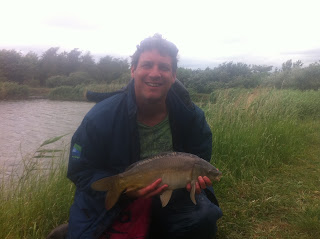 A match had kicked off over the other side of the lake and for a while Mark and I were catching at a better rate than them.  The wind came up and made it quite tough to maintain the presentation even at 5 metres.

Towards the end of the day the anglers on the other side of the lake were pulling some nice lumps out of the margins, not so on our side.

We finished our session and compared the catches, our normal "debate" over who was victorious ensued and I managed to gain half a point.  So our friendly score is now Lewy 9, Mark 7

We then had a look around the other lakes, the lake that we wanted to fish, the smaller carp lake looked fantastic.  The corner swims were great, ideal for 3 lines with a short pole.  So our next trip will be on that lake provided that a match isn't on.