June 06, 2011
My first match, organised by the fantastic crew at the Match Fishing Scene website/forum, didn't quite go according to plan... 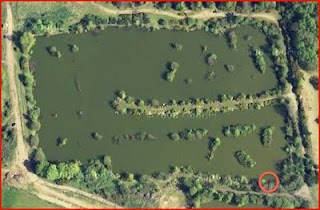 The draw was sheduled for 9am on Saturday 28th May so I drove down from the North East and arrived at Messingham Sands around 8am, plenty of time to have a look around, buy the fishery own pellets and generally ask what the best tactics are for the Island Lake.  At around 8:40am I'm aimlessly wandering between different groups of anglers asking, "are you the guys from Match Fishing Scene?".  The responses where mainly, "no mate, were xyz club".

One group told me the draw was taking place at the golf club just down the road... so I jump in the car and head to the golf course.  Walked into the "sprig bar" with my fishing boots, bib and brace to see two groups of anglers...

"Are you the guys from Match Fishing Scene?",  I ask.

"No mate we are with abc club", they respond...

I remembered that I had Colin's aka BNF phone number, so I called him to find out where everyone was.  BNF answered the phone and said, "I knew you didn't know where to go".  Turns out the guys were in the Cafe just a little further down the road.  So I jumped in my car again and found the cafe and the mottley crew that is the MFS "massive".  Immediately I felt at home as they started to take the mickey out of me... I'd managed to get to the draw but I had missed out on the breakfast, banter and getting to know the characters.

Lesson Learnt: always check the MFS website for the meeting details of any match... d'oh

The draw was very funny, Colin (BNF) drew and kept his peg number hidden.  The lucky two anglers who would be sat either side of him stood the chance of winning a "Battered by BNF T-Shirt", bright red, cannot be missed and highly avoided by all...

I drew Peg 20, my neighbours for the match where PikePerch and MPO, although I couldn't see PikePerch as there was a peg and a load of trees between us.  So the banter was just between myself and MPO (also called Mark). 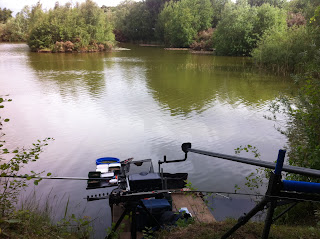 My swim for the day was an attractive corner of the lake giving me plenty of options, maybe too many options to be honest.  So I opted for:
The peg was quite difficult as I was sat very low down with a high bank behind me making shipping the pole back quite difficult.  So with 10 minutes before the "all in" I was ready to kick start my match fishing experience....

I fired the method feeder to the island with a banded 11mm pellet.  I could see there were some large fish in the stick-ups so I started to prime the pellet waggler swim.  I also started to throw small amounts of meat in the margin swim.

80 minutes into the match neither myself or MPO in the peg just over from me had caught anything.  I'd had a couple of line bites on the method feeder.  So I decided to switch to the 4m pole line in front of me to catch something... first chuck a nice roach, then some decent skimmers the 4m line was producing but it certainly wasn't "baggin time".

The large carp in the stick up's made another appearance so I had to have a go for one of those lumps, so switched to the pellet waggler.  Another 90 minutes passed and I hadn't even connected with a large carp.  The only consolation I had was that MPO over the way from me hadn't caught anything of note either.

I switched to the margin line on my right side with worm as hook bait.  I had a number of Perch from that method and then hooked something very large.  The grey hydroelastic streamed out of the pole until it bottomed out and the hook length gave way.

I stuck on the margin line for the rest of the match which netted some more silver fish and the odd small carp.  With a few minutes to go before the all-out was called I hooked another large fish.

The whistle went, I shout, "Fish-on".  10 more minutes past and I managed to get the fish within netting range.  The grey hydro was at full stretch, I used the pulla bung to maximum effect.  I caught a quick glimpse of something in the water but couldn't make out what is was, a big barbel or big carp.  The fish made for the space between the two keepnets and under the platform I was on and the hooklength gave way...

Packing up, the weightmen came round and I had managed 7lb 7oz which was good enough for second..... second last that is ;-)

Heading back to cafe for the results and payouts, BNF commented that I could come back if I was that crap... ;-)  A great day out, the match fishing career has re-started but I can only improve... I hope!
Match Fishing Scene (MFS) Matches Messingham Sands
Location: Butterwick Rd, Messingham, North Lincolnshire DN17 3, UK