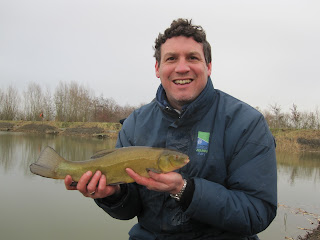 The weather in February has been a little harsh, so taking advantage of some improved weather forecasts and in order to get some silver fish practise in before my week at Stafford Moor with the Match Fishing Scene crew I decided to head to Kingsland Reservoir, Coates, Peterborough and have a session on the Silverfish lake.

As usual, my mate Mark joined me, so this was going to be a battle for a point in the 2012 Mark vs Mark competition.
﻿Kingsland Reservoir allows the use of keepnets during pleasure fishing sessions, so I purchased a proper match weigh sling for us to record more accurate weights for the 6 hour session.

The weather for the day was overcast and the mecury was hitting a massive 8 degrees C with quite a blustery wind.  We both decided to fish with the wind at our backs and selected two pegs dividing the middle of the silver fish lake.  The aerator split our pegs and was an area that we would both target as potential fish holding areas with differing amounts of success.

The Setup
I chose three main lines of attack.
Bait for the day was simple, 2 pints of mixed red/white maggots and a pint of casters along with some Marukyu EFG131 groundbait.  Hooklengths were very light, 0.10mm which is 2.8lb breaking strain coupled to size 18 carp maggot hooks.﻿


The All-In
Potting in two balls of groundbait on the 10 metre pole line laced with maggots and casters, this line would be topped up every hour with another ball of groundbait aiming to fish the line after two hours in order to give any feeding fish confidence before dropping a bait in.

Spraying 20 maggots out on the waggler line every 5 minutes, with the wind at my back they were going to the aerator, this would be my waggler line and I would also target this area with the feeder.

Starting on the waggler hoping to get a quite bite from the hungry silvers.  After 45 minutes and multiple casts the waggler line had not even produced one bite.  The waggler was set to full depth, utilising three number 10 stots as tell tales to indicate when the hookbait had reached the bottom and to add to the noise of the float hitting the water but nothing was biting, no nipped or smashed maggots, nothing?!  Mark next to me was also biteless.

The pole line was topped up with a ball of groundbait and I switched to a small groundbait feeder over the waggler line with a double red maggot bait to see if any fish where in the area.

As there were no bites on the waggler line the feeder would be left out for 15 minutes, if no bite then a re-cast to a different area to try to find the fish.  Finally a bite, the tip dropped back, fish on.  While playing the fish and getting close to raising the rod for netting, the hooklength broke at the loop knot...

Switching the hookbait to a worm as a more appealing food item for the fish in this cold weather the feeder went back out.  This time the bite was a lot more prounced, and in the net was a lovely tench.

Meanwhile, Mark has also gone out on the feeder and his first fish was a small roach. maybe the day would get better...

My next fish, a skimmer came after 30 minutes and then the feeder line didn't produce any more bites, so it was time to try the 10 metre pole line which had had 2 hours to settle.  To cut a long story short, the pole line didn't produce one bite.  I started a new line up on the pole with a small pot of maggots and casters and even tried to find the fish with a shallower rig.

The heavens opened and hail poured down chilling both myself and Mark.  Mark had managed to bag an Ide and a small chub.

The Result
We didn't both weighing the catches as it was clear that my tench had claimed the point in our "friendly" competition.

Conclusion
Neither Mark or myself had many bites, the weather leading up to the day seemed to have improved and we were both disappointed of not getting a nice netful of silvers which lead us to believe that the fish had obviously shoaled up elsewhere on the lake.

The silvers lake at Kingsland has a good reputation but today was just not our day.