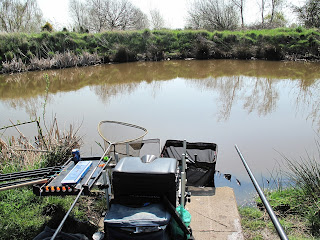 So far my best performance in a maggotdrowing festival so I was keen to do well again today.  The bar was shut last night, so we had a few drinks in the cabins but it was a pretty early night for all concerned and as such, not too many rough faces in the morning.  Overnight it had been quite chilly but the weather was being good to us all with bright sunshine.

The Draw
I drew out peg 27, which is on the top left hand corner of Oasis, giving me plenty of options.

The Set-up
As Oasis is a snake lake, it is an all out pole venue, but I set up a method feeder rod just in case.  The pole lines were as follows:

Bait was sweetcorn for hookbait as it hadn’t let me down so far this week, dampened micros, 6mm hard pellets for pinging across, meat and hemp.

The All-In
Plenty of time to set-up and refine rigs.  On the all-in I cupped in on my track lines, one with meat and the other with 6mm and micro pellets.  I threw a pinch of meat and hemp on my keepnet line and started to ping eight to ten 6mm pellets across my three 15/16 metre lines.

Shipping out to 15 metres, the float soon dipped and the first fish was on, unfortunately the hook pulled so I went back across and hooked another fish in quick succession.  During the first hour I took 15 fish from my 15 metre lines, rotating them after each fish.

I noticed that both Gary (Rambo) and Stewy where fishing tight to the far bank, but I didn’t want to go up early for fear that I would push the fish along the bank, so I stuck with the far shelf line and it paid off and the fish kept coming at a steady rate.  On the 2 hour mark I had around 25 fish but they were starting to back off so I chased them up the shelf with the 16 metre shallow line, again using sweetcorn as hookbait.

The sweetcorn is a tough bait and allows you quite a few strikes at bites. 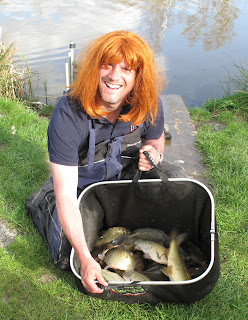 Hour three and the sun was shining, the fish didn’t appear to have come shallow and the far lines were tailing off, so I gave the track lines 10 minutes each, but this resulted in nothing hooked.

Going back long and rotating the lines the fish were back, this would be the rest of my match until the last 30 minutes.  I was catching both F1’s and Barbel with one nice bream to add to the mix.

The final 30 minutes I fished the keepnet line and hooked 6 fish, nice barbel and some carp.  It amazes me that the fish are right there were you’ve been landing fish all day long without spooking.  I also hooked two fish that torn off, assuming they were barbel and both were foul hooked as a couple of small scales came back on the hook.

The Result
51lb 8oz and a section 2nd.  Tony beat me with some lumps caught in the margins for 59lb.

Conclusion
Very pleased with my performance and felt comfortable for the first time fishing at 15 and 16 metres, it helped that the wind wasn’t gusting.  Sweetcorn had given me confidence during the week and it worked well again today.