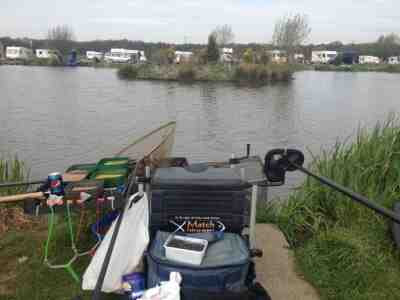 The final day of the 5 day festival and we would be back on Lindholme Lakes Bonsai lake.  After a great Thursday night there were plenty of sore heads.

The Draw
I drew last after helping Gary and peg 64 was left in the bag for me so I would be on the middle arm but this time on the left hand side.  There was a good ripple on the water and I had an island to cast to with the method or bomb rod, plus a peg to my right which was empty and would be a great margin line later in the match.  Neighbours for the day were Keith (Shallowman) and Pete (Texas Pete) so I knew it would be a fun match.

The Set-Up
The island would be a target area for the method feeder and I also chose a couple of pole lines.

The All-In
Cupped some meat in on the left hand 8 metre line and some 6mm pellets on the right hand line.  I would leave the margin line feed until the last two hours of the match.

The Method line's as per last year I would target 3 area's on the far island and rotate the casts, feeding a pinch of 6mm hard pellets over each line.  The wind was quite gusty and getting the pellets out with any degree of accuracy proved difficult and they were spraying all over the place.  The method feeder was baited with double corn, then a skin of groundbait and a skin of micro pellets over the top, the idea being that the micro's would be a food target for the fish and the groundbait to create the cloud when the fish were over the method...

The first hour passed and I was re-casting every 10-15 minutes, but no real bites to be had.  I noticed that the bait was coming back with quite a bit of weed on it, so I was now casting short of the island and further left and right to avoid these areas.  It worked and I soon had 2 carp in the net, but the fishing wasn't going to plan.  I topped up the 8 metre lines but would leave these for another hour to settle the fish on them.

Meantime, Keith had a wander over for a chat, he was struggling too and had abandoned the fishing shallow due to the wind and not being able to get the casters in a tight swim, just like me with the pellets.  The tip flew round and a nice mirror came to the net.

The method lines weren't produce a regular stream of fish, so I decided to try the two 8 metre lines with the idea to take a fish from one swim and move to the next.  Dropping in the 6mm cube luncheon meat bait, the wind was dragging the float through the swim, just as I was considering changing the depth to lay some line on the deck to steady the float it dipped and a lovely tench was the result.  I took 6 lovely tench in the next hour.

The last hour came round and I'd being chopping and changing between the method lines and my 8 metre lines but nothing sport wasn't consistent.  Margin time!

The wind was gusty still and the water became quite choppy, dropping in the bait the float soon dipped and a nice roach was in the net, not a large carp that I had hoped for... with 20 minutes of the match remaining finally a good fish from the margin was on and happily plodding around my swim not coming in... Netting it I was happy with the result, around a 6lb mirror carp, going straight back to the margin I soon hooked and landed another nice carp and then the whistle went.

Result
48lb 7oz for section 2nd, pipped by Jim who had over 60lb of fish... well done mate.  That gave me 7th overall getting done by Keith on the same points as me but a larger weight.  The full results table is below.

Conclusion
The two margin fish late in the match certainly pushed me up the section points, but they weren't there earlier.  Very happy with my performance and the highest I have placed in this festival.

Full Results
Job well done Gary, great organisation and things ran like clockwork!  Congratulations to Paul for winning the event for the second year running and some impressive weights during the week.  Click to enlarge. 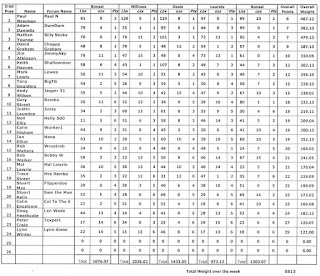