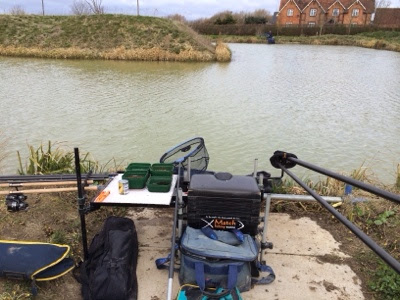 My last trip to Peb's place, How End, was a disaster with me blanking!  Peb's had put me on probation so it was with a little trepidation that I returned to How End to put the records straight.

Today was a MFS Champions League match so I was eager for a good result.  We would be split across Dani's and Yasi's lakes.  The weather over the weekend had been quite warm in London but a cold snap overnight hopefully wouldn't dampen sport today.

The Draw
I really wanted to fish Yasi's, mainly as I've had most experience on that Lake, so typically I drew in Peg 2, Dani's...

My neighbours for the day would be 3 Shirts Shedders and Colbrad.  I was also in a split section across Yasi's and Dani's for CL points... Not the best, but you take your lot.

The Set-Up
Dani's is a bigger lake than Yasi's and as such the waggler and feeder/bomb rods come into play.  I had a good peg so I felt confident.  The setup was as follows:
Bait for the day maggots, worm, caster, corn and dampened micro pellets.

The All-In
Fishing 10am while 4pm I was ready on the whistle.  The match plan was to feed my pole lines, let them settle while on the maggot feeder / waggler.

The 14 metres line was fed with a squeeze of micros, some maggots and casters.

The 6 metre line would be with caster by hand.  I'd leave the margin line until later in the match.

Spending the first hour on the feeder I soon had a couple of the new chublet that Pebs had stocked, at least the blank was broken...  Pebs came and sat with me as I was trying the waggler due to the wind dropping... to follow was a quick coaching session from Pebs and an adjustment of my rig.  "You missed that bite Lewy, and that one... and that one", Peb's chided.  Shedders was also joining in with the banter asking whether or not I would have to pay for my coaching session...

Peb's gave me a good tip, which I'll share.  Moving the waggler about a foot at a time to make the bait rise and fall until I was off the far shelf was the main tip, this would normally induce a bite.

As soon as Peb's left, I hooked a fish, well if you could call it one, it was more like a silver blade with eyes and fins... these were obviously responsible for the missed bites I told myself, so I decided to change hook bait to corn in hope of a larger fish, nothing.  So I switched to a larger section of worm, this changed my match.

I hooked into the carp at long last.  There is no better feeling than a waggler rod in hand and the tip bouncing with a small, but angry carp on the end.  After 3 carp, disaster, hooking a fish, the size 20 carp maggot hooked straightened.  Replacing the hook length with the same hook type and size, the next fish also straightened the hook...  Time to beef it up so I changed to a carp maggot size 14, this never let me down for the duration of the match.  Interestingly, I've never had a straighten size 20 carp maggot while fishing the pole, maybe the waggler needs a different and stronger hook given the strike action?

The wind started to get up, making the waggler harder to present, I changed the feeder for a small bomb and started using that with a worm section as bait.  Not many bites until I started to "twitch" the line.  The wind was also making it impossible to get any casters out onto the shelf, so I gave up trying rather than spraying bait everywhere.

As the wind died down, it was time to try the pole lines which produced nothing.  My waggler line was the one that was catching so I stuck with that until the end of the match.  It was great fun using the rod and line for a change rather than the pole.

Conclusion
More practise needed on Dani's.  The wind hampered my pole attack and those lost fish really cost me dearly.  On the bright side, my blank was broken... But I could have got a lot better result.

Interestingly, speaking with Trevor Jeans after the match he mentioned that method feeder on the far shelf slope worked for him last time he fished this peg... useful to know and something I never thought of trying.  Finally, thanks for the coaching Pebs! ;)