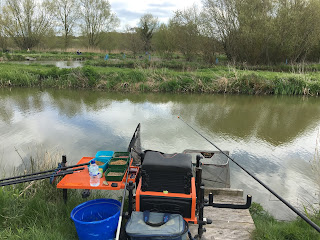 Second night in Sailsbury and a few of us headed to the fantastic indian that deserves a Michelin star, Anokaa!  The evening events were to prove very late for the hardcore few, I ducked out a bit earlier than normal.

The next morning a very hungover Andy Gregory heads down to the breakfast area and declares, "I want the worlds largest breakfast", "but no tomatoes, no eggs...."  It was hilarious.

No forgotten keys today, although we had to deal with the official retirement of Animal from Match Fishing.  Luckily he'll still be going to Stafford Moor, but he will be missed by the lads!

Set-Up
Again, all pole today, so the lines would be.

Bait was the same as yesterday.

All-In
The plan was to fish the far bank in multiple places, feed my 5 metre and margin lines for later in the match.

I potted in groundbait and micros on my right hand 5 metre line and some meat on the other.  With the weather being cold, the meat wasn't quite working yet, but I thought I'd give it a try.

The far bank I had picked three spots to fish and would kinder pot in some minor pellets.  Initial bait was a bunch of maggots which quickly found the roach and rudd, so a quick change to sweetcorn soon connected with the carp.

I had a reasonable couple of hours fishing across although the gusting wind was making presentation difficult.  Sconey was catching well next to me, Deano wasn't getting any fish on the far bank.

I was picking up the odd  skimmers on the 5 metre line and kept on looking in the margin, but nothing was there.

I decided to put a large pot of groundbait and micros on the far bank and see what that would do for the line.  Going straight over it, the float buried and a carp was on.  Straight back out on that line and another quick carp, then nothing...

Re-potting bait in brought the fish back and I had a great run of carp, still checking my margin lines every now and again.

Deano next to me hooked a lovely carp that would look great in anyone's pond!  This snake lake certainly throws up some lovely looking fish and it would be my turn next to catch one.

A beautiful orange koi came to the net.  In the final hour of the match I hooked a fish on the far bank that I suspect was foul hooked as it bolted down towards my left and ended up snagging my rig over the far side.  Pulling for a break the whole rig came back intact.  Next fish also snagged me and I had to pull for another break.  The rig released itself and next thing I knew, the fish was still on... bonus!

Stoney called the all-out and as I hooked up the rig that I'd caught most of my fish on the line broke...

Result
Weighing in I had 55lb in my nets, which ended up putting me 4th on the lake.

Conclusion
Taking another Guernsey pound of Bez today was the highlight.  I was very pleased with the way I fished todays match and honestly wasn't expecting such a high finish.  The key was potting in big on the far bank.  Both Sconey and myself found this put us in touch with the fish.

A great weekend as per usual.  Huge thanks to Sconey for the organisation and all the songs he sang on the bank, namely, "Headbutts" and "TOAST" ;-)