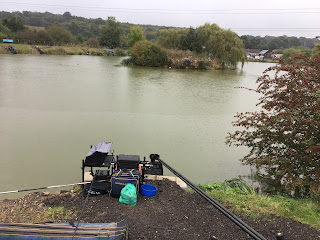 After a quiet night in downtown Waltham Abbey and a cracking meal at the Turkish restaurant it was back to Lake John for Day 2.

Fishing is one of those sports, yes it is a sport for you none angling readers, where you get to meet famous anglers young and old, socialise and fish with them.  Today was one of those days!

I was having breakfast with Andy Kinder, Chris Vandervleit and none other than Dickie Carr who has fished for England in both the regular and veterans team.  What a lovely bloke Dickie is and it brought back memories of reading Angling Mail and Times featuring Mr Carr.  Great to meet you Dickie!

The Draw
Today's home would be the back bank on Peg 30 with an even longer feeder line to the island.

Set-up
Again the feeder came out, this time the 12 foot rod with a mini pit reel as it was a big chuck.

Pole lines which were all the same depth, so one rig required:

The rig was a heavier 0.8 grams given the days windy conditions.  The bait list was the same as day one.

All-In
As per the previous day I cupped in 3 balls of groundbait on my 3 pole lines and spent the first hour on the feeder.  It was a long chuck but the bigger rod and mini pit reel made it a lot easier.  A repeat of the previous day was on hand... the first hour only a couple of small skimmers from the feeder line which was quite disappointing as I expected some carp early doors.

I tried the long pole lines but nothing on those yet, so back on the feeder for the next hour.  Carl a few pegs down was catching steadily on his 5 metre line, some proper bream too!

Lee next to me was also catching on his long pole line and Ricky in the corner was struggling with the large carp smashing him up on a far to regular basis.

I fished the 5 metre line for the rest of the match and it got stronger for me.  Skimmers where coming on a regular basis only interrupted every now and again by a very large carp.  Luckily I landed both the big carp which were both well over 10lb!

The all-out was called and it was weigh in time.

Result
38lb 8oz for 3rd in Section which surprised me given I felt Lee next door had been bagging good fish.   The two "10lb" carp helped a lot.

Conclusion
An enjoyable day which produced a great weight of silvers from Carl, Match organiser.  The silvers finally started to show which could have been down to the bait going in the day before.  My 5 metre line proved to be the best line of the day.

A great two days, thanks to Carl for organising and to Lake John and MD Colin.