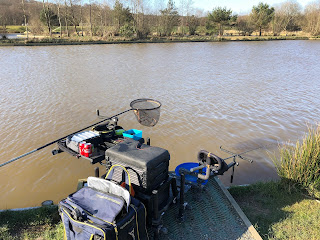 The previous night those already at the fishery went to the Lymington Arms for a beef dinner with Jo and Paul and the draw for teams.  Herbie had sacked last years captains and new captains assigned, you can imagine my surprise when my name came out to be a team captain.

I drew from the 4 pint pots and drew Shedders, Pete Merce, Pat Pritchard and Hainsey, what a team!

The day when the rest of the lads would descend on the fishery and the chance to have a Champions League match with all three lakes in the draw.

I had popped out early in the morning to grab some more cash and toast for the lads.  It was an early start and I managed to get back to the fishery before 8am, however my "entry speed" into the fishery had been captured on CCTV together with the large cloud of dust I'd created.  By the time I would get to the draw I'd been identified by Herbie as the culprit and was in for a surprise fine!

The Draw
Rolling draw and of course we were the last lodge to get there.  Jo gave me a telling off for my "speeding" offence and was fined an appropriate fiver which was donated to the Devon Air Ambulance fund.  Sorry Jo and Paul ;-)

Well, I drew on Woodpecker yet again!  My luck with that lake isn't the best.  Today I'd be on the high bank and peg 14, so at least I'd have the wind off my back.

Set-up
After yesterday windy day and success on the feeder I decided to try an all out feeder approach particularly as when I got to my peg the wind was causing waves to crash against the boards on the island.  I'd decided on a couple of lines to fish the feeder, they were:
All-In
As yesterday, I decided to feed one line heavily and the other very negatively, so I put 5 large feeders on the left line and fished the right hand line with no feed apart from what was in the feeder.

I'd leave the left line to rest for a couple of hours and on the right hand line I'd fish 5 minute casts initially so the stopwatch came out (a great tip from Steve Ringer).

Today's story was very similar to yesterday, after 2 hours I had no bites at all.  The rest of the lake was also struggling.  The beast from the east was really having an effect on the fishing.

I tried the left hand cooker line with no success at all.  I even opted for 30 minute between casts to see if anything developed.  Nothing.

The wind did drop making the pole line fishable but I'd not set up that line which was a mistake as the lads around me were now catch on the 13-14 metre lines.

By the time the all out had been called I'd put 3 fish in the net and wasn't confident of a good result.

Result
Another terrible result and last on the lake again! 1lb 8oz, what a terrible start to the festival I've had.

Conclusion
Today's conclusion is easy.  I should have set up the pole line as the wind dropped during the match which made it fishable.  Quite simply I'd been lazy just setting up one rod.  Lesson learnt, move on...
Match Fishing Scene (MFS) Matches Stafford Moor