Now the final day of the festival is a leveller for all of our skill groups. We would no longer be fishing our section as we had completed the lake rotation. I had managed to get into the 3rd group, so one up from the numpties.

Today was also a special day for Big Ben, it was his 40th birthday so we all sung Happy Birthday and Jo had kindly got him a lovely cake and some balloons... they never went to the peg with him...

Set-Up
All-In
Cupped in two balls of groundbait with chopped worm and caster on the pole lines and jumped straight onto the waggler pinging casters over that line. It wasn’t long before the roach where lining up on the waggler as per the previous day.

After around 90 minutes I had a quick look on the pole line and was very surprised that the float sat stationary, lifting and dropping, pinging casters, nothing!

So back on the waggler while I tried to get my head round why the pole line was dead, it would only be later that I realised (or was told) that I’d not fed enough to hold the fish.

The waggler line had backed off a little and the island was looking a tempting target for the feeder, so using the same set-up from yesterday, small feeder and hair rigged corn I dropped the feeder next to the island. 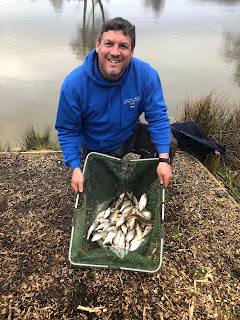 Settling the rod and sinking the line the tip wrapped round and fish on… hoping for a large skimmer I was pleasantly surprised to see a nice dumpy roach. After an hour I’d put some better stamp roach in the net but felt the catch rate was better on the waggler so dropped back onto that line.

The day flew by and I was calling the final all-out on the 2019 Stafford Moor festival.

Conclusion
Post match I had quick chat with Darren who mentioned that I probably fed too little on the pole line and that is why the fish simply weren’t there when I went on the line.

I felt the feeder line, while it produced the better fish I wasn’t catching them at a rate that the waggler was producing fish.

Finally, the carp angler, while he set-up at a respectful distance to my peg, it certainly affected my close in line for the worse. Still I had a great day again on the waggler catching fish most of the day however very disappointed with my result and even worse was that I ended up fourth from bottom overall for the week.

A great week at Stafford Moor but a disappointing result is the best summary. 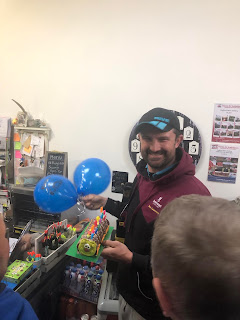