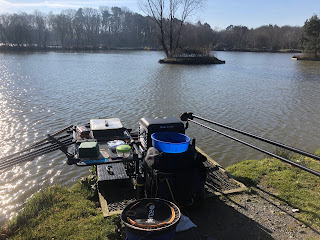 With the arrival of 2019 another visit to Stafford Moor for the MFS silvers festival comes around. Organised by Herbie, our intrepid leader supported by Kenfish and Hathers.

I had arrived early on the Saturday morning having suffered some sleepless nights in excitement for the week ahead and had some opportunity to practise on both Woodpecker and Pines.

Over the weekend the weather report was shaping up for a cracking week considering 2018 we suffered from the “beast from the east” this week promised to be totally the opposite and around a 20-25 degree C difference in temperature!

Monday morning soon came around and we all gathered at the JoOp, “the tackle shop with everything” ready for the start of the MFS Stafford Moors Silvers.

The Draw
Today would be an open draw across all the lakes, Woodpecker, Tanners, Pines and a new addition for this year Beatties (the specimen lake). It would also determine the section we would be fishing in for the next 4 days.

Tanners and Peg 2 came out of the bag. Not a long walk from the Hollywood Lodge.

My fellow section / lake anglers ended up being:
Set-up
Some of the weekend practise had thrown up some weights on the feeder so that was quickly set-up, to be cast to the central bar.

Out on the feeder to let the other lines rest which I ended fishing just past the gravel bar that is in line with the island for the first 90 minutes of the match. Bites were pretty much immediate on a single red maggot and I was casting on a regular basis and not always down the same hole, clipped up around the island and open water before the line started to ebb.

Topped up the Top 2 + 2 with sloppy ground and some casters and had a look on the line which produced some small roach.

The great weather also came as a bit of a curse as the sunlight was very bright and the white water made seeing a black top float very hard if not impossible on the long lines.

The long pellet 13 metre line with I simply could not see the float, the same was true on the other long line, so back on the feeder until the light changed.

The light didn’t change, infact it got worse so I ended up rotating between the island feeder line and looking on the 13 metre ground bait line with the feeder rod to pick up some more fish. The margins were also a waste of time with nothing coming from either one.

Alan Mac in the last hour had a visit from the larger fish and he plundered them, my close in line didn’t produce the results, so I knew that Alan had overtaken me in that last hour.

Result
6lb 10 oz for second last on the lake! Not the start I wanted to the festival, worse still a pound and a pint for 76 Trombones.

To add to my terrible result, Hathers knocked me out... he is a class act! ;-)

Conclusion
If I’d have realised the light would have hampered the long pole I would have been tempted to fish the feeder for the majority of the day and only fed the short line in the hope the larger skimmers turned up later as they did for Alan next door.