Bait was a mix between natural (maggot, caster, worms) and pellets which would be fished on separate lines.

All-In
Kicking off the swims I put a small ball of sloppy groundbait with casters on the 10 o'clock line and some 4 mm pellets on the other long pole line.  The rain then started.

I decided to try the waggler, pinging casters over the top until the wind got so bad that it made presentation impossible, so the bomb rod went out over the line.  Fishing too close to the far bank wasn't the way to proceed as debris was coming back on the hooklength and the bomb so I back off around 3 metres just down the slope.  Not bites, no line bites, nothing...

This forced me onto the long pole lines a little earlier than expected.  Given this lake was new to me I was opting for the negative approach I just didn't expect that I'd have to wait for such a long time before a bite.  Finally the float went under and a small roach had taken the single red maggot hook bait. 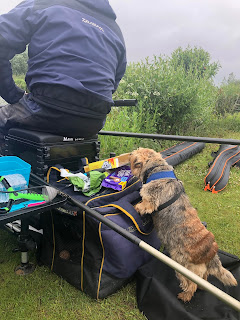 More roach followed however nothing of decent stamp.  This match wasn't going very well for me and Nobby to my right had started to catch some tench on what appeared to be his short line.

The girlfriend turned up and as requested by Nobby she had some cakes with her.  Little did we know that it was Nobby's birthday!  Happy birthday mate, trust you enjoyed the cakes.  She had also brought me a flask of tea which was very appreciated!

I had dropped onto the short line and as luck would have it, the next bite came from a large bream of around 4lb.

The dog also came to visit too and was enjoying sniffing round all the gear and hovering up any loose pellets!

The day didn't really get any better and the margin failed to produce for me.  Some more small fish and a very disappoint match on Richardsons for me.  The all-out came and it was time to get all the soaked gear put away.

Result
5lb 4oz although not last in section... there was a DNW!

Conclusion
My thoughts on today.  My neighbour to the left fished a banded 8mm pellet on a long pole line and commented after the match that holding the long pole was tough.  He ended up with second in section... Lesson here?  Take the bump bar just in case!

Nobby had 10lb of fish mainly from his short lines.  Go short earlier?

What was abundantly clear was that the bites needed to be waited for and I'm sure the negative feeding approach was the right one.

Harris Lake on Sunday, a totally different proposal to Richardson and a chance of some big tench and crucians.