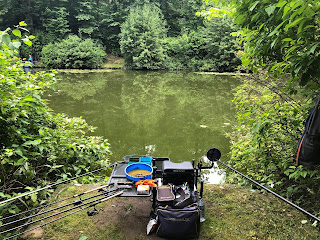 Fourteen of us fishing today for round two of the Godalming Summer League and it was back to Wood Lake, Busbridge.

Now this venue is extremely picturesque however rumour was that the fishing had been very hard lately.

The Draw
Peg 24 for me today.  This peg is on the left hand bank looking from the car park at the far end of the lake.

The journey with the gear on the barrow was certainly interesting!  We do carry way too much gear!

Set-up
The margins where screaming fish! This would be a power top two and three sections to get a good depth of around 3.5 feet depth.

Baits on the menu, maggots, casters, sweetcorn, some worms (just in case) and the ground bait from the Bury Hill session with some micro pellets through it.

All-In
So the match plan was to fish the waggler shallow, pinging casters and to either go over that line with a small bomb or set the waggler at full depth.  The margin's would be fed differently, the one on the left with groundbait and the one on the right with sweetcorn and casters.  The sweetcorn had been chopped to create a cloud and not leave large bits of sweetcorn on the deck.

So the shallow waggler attack started however it took some time before the first fish to show but they eventually did in the form of Roach and Rudd, but not in any number.  I stayed on this line for 90 minutes before I decided to see if there were some bigger fish on the bottom so put the bomb rod out for 10 minutes as a test.

Well nothing showed itself so I primed the margin swims.  The one of the left with groundbait and micros.  The right swim with chopped up corn and some casters.

Putting the waggler at full depth and changing the shooting pattern to be strung out I rig all I seemed to catch were perch!

Half way through the match I decided to drop on the margin lines.  Wood Lake, more of a natural lake I decided to have a timed ten minute look on each of the margin swims.

Left margin first with a bunch of maggots... perch, instantly! A bait change to double sweetcorn and the timer restarted.  a few line bites from the perch buzzing around however nothing solid.

Right hand margin, double corn and reset the timer.  After 3 minutes the float buried and finally a good fish on.  The water being quite clear I could see a big slab of gold come out from under the tree and the net closed on a lovely bream!  Bonus fish number 1!

Back on the right hand margin swim, I was hoping for another bream however as the 10 minute timer finished, nothing. 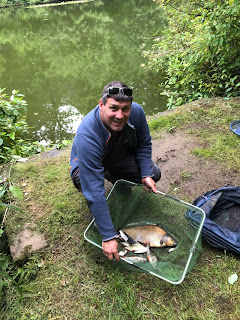 Back to the waggler, double white maggot at full depth and finally I struck on a bite and I knew it was a better fish with the rod arching over and the reel clutch starting to sing.  Hopefully this was one of the lakes large tench.

It took off to the left, popped up just out of netting range, it was a good tench and then it roared straight for the sunken trees on the right!  The rig became snagged up on what must have been branches below the surface.  Slackening the line I could see the float still moving so the fish was still on and I was hoping it would free itself however it never happened as my next attempt to get the fish out of the snag and the hook length gave way...

The next disaster came after reseting the waggler and while casting out I caught a tree behind me breaking the line.  With thirty minutes on the clock I decided to waiting it out in the margins unit the all-out.

Result
6lb 8oz for around about 6th place overall.

Congratulations to Andy Rogers winning with 27lb 14oz on peg 6 made up of Bream on shallow waggler and casters.

Third went to Charlie Salmon on peg 30 taking 9lb on a whip and casters.

Fourth was Dave Hoffman on peg 7 with 8lb 15oz

Conclusion
The lost tench under the bush definitely cost me a potential match 3rd.  It also killed that margin line.

Thoughts on what I should have done differently?  Well I could have persevered on the shallow waggler attack in the hope that the larger fish came up in the water however with hindsight I hooked the large tench on the deck with the waggler so maybe that was the best option.

If however I'd have know this match would have been mainly won with a large bag of bits I would have definitely grabbed the whip and fished for the smaller fish at around 3-5 metres in front of me.
Godalming Angling Society Matches Wood Lake