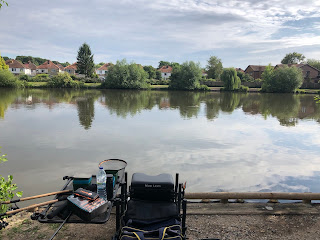 Set-up
I had decided while packing the car that I would leave the pole at home and fish rods only.  In the bag was a waggler rod and two tip rods, one for standard swim feeder / bomb tactics and the other with a method set-up.

The waggler line was fed with six balls of groundbait laced with some casters and dead maggots which I would leave for a couple of hours before having a look.

Out with the feeder, starting on a 5 hole cage feeder and casting at 5 minute intervals.  Third cast and the tip was rattling however I missed the bite.  Next cast a small skimmer came to the net.  Figuring out that the fish were in the swim I changed the feeder to a small 3 hole cage feeder adding only a few casters and groundbait.  The hook bait was double dead red and white maggot.

Still casting at five minute intervals and the first better fish arrived.  A lovely bream of around 3lb.

Fish started to arrive pretty regularly in the next hour much to Nathan's frustration.  So I watched Nathan casting out a few times and offered some advice.

Clip up and cast every five minutes to the same spot. I also handed him a stopwatch.

I was still casting every 5 minutes, bite times normally around 2-3 minutes.  I was chatting to Nathan and the tip wrapped round, almost like a carp bite.  Lifting the rod nothing, apart from a broken hook length at the loop.  New hook length upping the line strength and hook size to a 14 on 0.13 line.

After around 20 minutes Nathan hooks into a fish and lands a lovely little tench.  As he was unhooking it mentioned that there was a hook and some quite fine line also in it's mouth.  He brought the hook over, looking at it I could tell it was my hook that was broken earlier.  Grabbing my hook length box we compared the hook and sure enough it was!  Bizarre!

The day continued on with more fish coming to the net.  John moved down one more swim as the sun was right on him.  That move put him in touch with the fish too.

Nathan and I had a right battle going on, interestingly Nathan was on banded 6mm pellet which seemed to be picking out the better stamp fish however my double dead maggot was bringing the bites quicker.

I had a couple of spells on the waggler hoping that some fish had settled over the groundbait however the tow on the water was quite pronounced and I sacked off that idea.  The feeder line was producing the results.

We all packed up and headed home around 3pm after a great 6 hour session.

Result
Approximately 20 large bream for me for an approx 60lb, Nathan having a great session with around 14 large bream and the tench, John catching around 8 bream.

Conclusion
A great day for all three of us and a great reminder to keep things simple, cast regularly and accurately to keep the fish coming.

The miracle of the tench that broke me off being caught by Nathan and retrieving the hook was pretty amazing demonstrating that the fish still feed even after being hooked and potentially spooked.