July 02, 2019
Something a little bit different and an opportunity to branch out into another area that fishing offers.  Time to target some specimen fish, not just large carping but an opportunity to get some personal bests on the board and target specific types of fish. 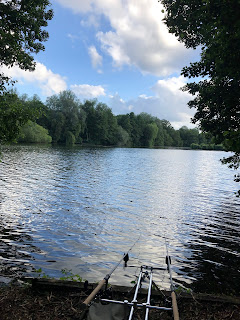 Johnsons Lake is where the current British record Crucian Carp lives, banked in 2015 at 4lb 10oz.  What a better place to start?  So this is how the session went...

The Swim
Peg 28 on Johnsons Lake, arrived on the 30th June and set-up "camp" for the evening, ensuring everything was to hand and putting my weigh sling and fish mats in an open area.

Set-up a carp net, just in case and my large 24" landing net.

Hookbaits were pop up corn, buoyant maggots and buoyant caster all of which would be hair rigged.  I was using a simple green fishmeal groundbait with some soaked micro pellets.

I also had a hybrid feeder ready to set-up in case the fish weren't having the helicopter rig. 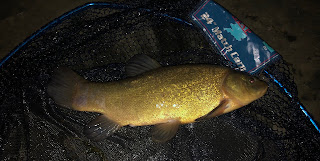 I decided to fish the right rod at 40 metres straight ahead and clipped up using my measuring sticks.  The left rod was not clipped up and I decided to use this one to cast around the swim on the left as I was only fishing for one fish at a time.

I would recast the rods at around the 15 minute mark.  The session started at 6:30pm however the first fish didn't set the bite alarms off until 10pm, it was a small 4lb 8oz Tench on the right hand rod.

The next fish also took a liking to the hair rigged casters that I'd changed from the fluro maggots however this was a lot larger and felt very carp like...  I could feel the head thump like a carp and it was a head shake that broke the hook length as I was bringing the fish in.

The right hand rod went off just after that with the worlds smallest carp.  I changed the sweetcorn out for two hair rigged casters also.

No more fish that evening so I brought the rods in around midnight and settled down to a night by the lakeside with the alarm set for 4:20am to coincide with dawn.

The next day I woke up at 4am put the kettle on and recast the rods, again 15 minute casts, both rigs had the double caster in a T shape on the hair.

The first fish of the morning was a 3lb 12oz tench however 45 minutes later I was to experience a double hook up and also land a new PB tench.

6:15am the crucians started to come on the feed and I landed and every crucian I landed broke my PB until 7:30am when a very special fish arrived, my first crucian over 3lb, at 3lb 1oz which little did I know would be topped 2 hours later by a bigger fish at 3lb 4oz.

By 9:30am bites had stopped, two further casts of the rods and nothing so it was time to pack up and head home for a shower and some breakfast.

What a session, seventeen fish and two personal bests!
I have heard that Johnsons can be a cruel mistress of a lake, well today she has been extremely kind to me... maybe trying to lure me away from match fishing and into the dark side??? More blogs to follow, look for the tag "specimen". 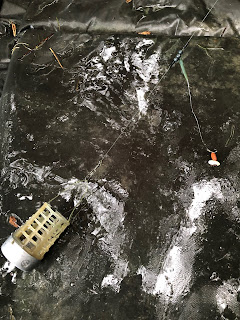 I also recorded a new Tench PB at 6lb 14oz and excuse the dorky shot as I was using the iPhone's timer function ;-)
More Pictures
Pictures of the other fish caught... not in any particular order.