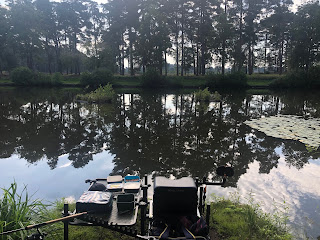 Set-up
The lily pads would be the main attack today so I chose two swims:

The waggler rod was also set-up as a secondary plan.  Bait was all natural casters, maggots, worms, sweetcorn together with some micro pellets and F1 Dark groundbait.

All-In
I decided to start quite negatively and cupped in a small ball of groundbait with some chopped worm on the long lily line and some casters on the short lily line.  Giving it time to settle a quick dabble on the waggler.

Trying the long lily line the chopped worm had obviously had its effect and I was bringing back small perch most casts.  I decided to try and feed them off with more chopped worm and caster in the peg.

The close lily line also produced small perch and Rudd, so back to the waggler line as the fish were a better stamp.

The fishing was slow at our end of the lake that was an understatement, it was a matter of pinching fish from the different lines.  More importantly no bonus fish were showing!  The hot weather was making the fishing quite unbearable and it did cross my mind to pack up and head home but I persevered on the waggler line as it was producing slightly better fish every now and then.

Richard called the all-out and it hadn't been a fun day to be honest, lets see what the scale would say on todays catch.

Result
4lb to tie the section win with Richard Cain.

Conclusion
The plan of targeting the lily pads had to change and the waggler line certainly produced the goods albeit small fish on a regular basis to help with the section win.  The weather certainly didn't help, hot and still.

The other end of the lake and the second section was a different story with it being in a shaded area and the winning weight of 22lb from Ian Turner followed by Tommy with 9lb.