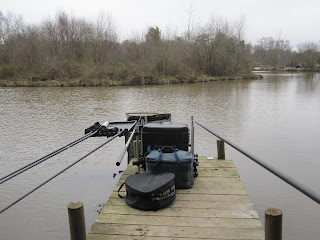 Day 2 of the MFS Silvers Festival at Stafford Moor.  It was a slow start this morning with the after effects of a tequila bottle, Jack Daniels Honey and copious amounts of beer.  I drew peg 16 on Pines.  The peg is the furthest away from the car park and the walk was a bit of a pain, but at least it warmed me up.

The Set-up
Pines, Peg 16 is in a bay which is about 20 metres wide so another day on the pole.  The advice was to fish long and after plumbing up, the peg was a uniform two and a half foot deep, not looking promising with the cold weather.  So I set up three lines as follows: 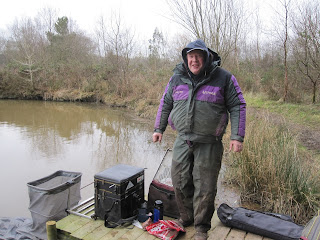 I was about to cup in a ball of groundbait and Steve May stopped me.  “If that’s bigger than  half a golf ball don’t put it in”, he warned, so I heeded his advice and put a kinder pot on the pole and dropped a nugget of sloppy groundbait in on both 13 metres lines.  Baiting with a single red I went over the right hand line.  The plan was to take a fish from one line, top it up with a nugget of groundbait and move onto the other line, rinse and repeat.

It took about 20 minutes for the first small roach to come to the net, moving swims I took another fish and after the first hour I had 5 small roach in the net.  Meantime, Steve May had two cracking skimmers so I was well behind him. 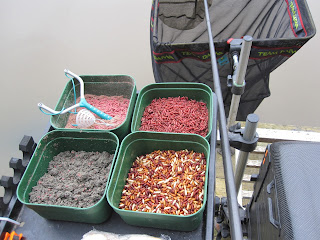 The second hour passed pretty quickly despite not catching much.  The third hour was a lot better as I hooked a lovely tench, followed by a beautiful golden tench off the other swim straight afterwards.

It was a very cold day and I was feeling it.  Presentation of the rig was hard as the pole was blowing all over the place despite having a long line between pole tip and float.  To combat the wind I had to use 3 number 8’s as backshot.

The final couple of hours fishing alternative swims I took some better skimmers but I’d had a tough day.  The inside line produced nothing.

Interestingly, Steve May was fishing the lift method with his float dotted down so much that you could hardly see it.

The Result
8lb 3oz and a section last... battered by Steve May off the next peg who had 21lb and the lake win.  Well done Steve!

Conclusion
The wind was very chilly and was blowing right across my peg making presentation very difficult.  The float was very difficult to read as the surface water colour kept on changing with the wind.  I fed very negatively and was well and truly battered by Steve May off peg 14 next door.

The T-Shirt
Unfortunate for Dave Speller (Shedful) as he was pegged next to Colin and managed a world first, being the only person to get two t-shirts in two days.  He was put on suicide watch that night and all sharp objects removed from the Lodge ;-)

Lets hope the draw tomorrow is kinder to Dave!

The Lodge of Plenty Dinner Menu
Gammon, roast potatoes and carrots.  Paul (Animal) had two dinners as per usual.  Colin then produced a big gammon joint that we also tucked into, meant for sandwiches but it never lasted that long!
Match Fishing Scene (MFS) Matches Stafford Moor