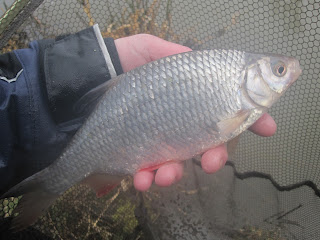 Taking advantage of a Friday off work I decided to try a new local venue, Yarm Fishery, also know as Yarm Lake run by Tees Valley Lakes.  Yarm Fishery has been totally revamped by Alfy and the team at Tees Valley Lakes and what a great job they have done!  The pegs are neat and tidy and the lake is protected by an electrified otter fence which makes shipping your pole back a small challenge.

Tees Valley Lakes first came to my attention about 18 months ago, they have since increased the fish stock levels substantially with some small carp, roach and tench adding to the existing stock of fish.

I arrived around 8am, the weather was overcast, cold and a light drizzle of rain.  John, a member of Anglers Cabin was already there when I arrived.
John had fished the lake since the revamp and also when it was owned by Albion Angling Club many years ago.

John had taken peg 7 on the far side of the lake giving him the point of the island, some open water to his right and also a far margin swim.  After reading some advice from the lads on Anglers Cabin I decided to tackle the open water from Peg 10.

The Session
I plumbed up on Peg 10 and found a small deeper hole on the 6 metre line to my left and a swim at 13 metres the same depth towards the island.  As I'd not seen this fishery before I decided to start drip feeding maggots in via the kinder pot rather than dump a load of bait in.  After an hour the float dipped and a fish I had not caught for years came to hand, a lowly stickleback!  Into the second hour I had two roach, beautiful condition around 4oz and they put up a great fight on light elastic.

John on Peg 7 was catching steadily and my swims weren't producing the same stamp of fish so I popped over a sat with him.  John was fishing right across into the reeds off the island, the float settled and bang, fish on.  John mentioned that bites were even quicker in the open water but shipping the pole back was a little akward so he stuck to his island swim.  I decided to move onto Peg 9, so I would also have an opportunity to exploit the reeds on the island opposite.

It was 13 metre's to the island, so a comfortable pole range and by putting the pole roller right next to the otter fence I was able to ship back over the fence and use a branch on a tree behind as a temporary roller so shipping in and out was simplified and I didn't have to break the pole down.

First put in with a kinder pot of maggots and casters, the float settled then buried and a cracking roach was in the net.  The move was the right thing to do, easy to talk to John and the fish were coming almost 1 every put out.

John was doing extremely well, his approach was slightly different and he was potting in a small ball of chopped worm, this was bringing a good stamp of fish.  Thinking he had hooked a small carp a lovely roach was netted that we estimated nudging the 1lb mark.

Time flew by and we both packed up around 3pm.
John had a very impressive 79 fish to my 30+, all beautiful condition roach, it would have made a great catch shot if we had the keepnets in.

Conclusion
30+ cracking roach made for a very enjoyable day.  John's 79 roach and 1 tench eclipsed my catch including a brilliant roach of around a 1lb.

Yarm Lake has shown it's potentially.  The fish will only get bigger and the fishing even better.  Tees Valley Lakes have some great plans for the site, based on what they have done with Yarm Lake I can see a great fishery evolving which is right on my door step!

More Pictures
A cracking stock of roach, just see the pictures of a select few fish... 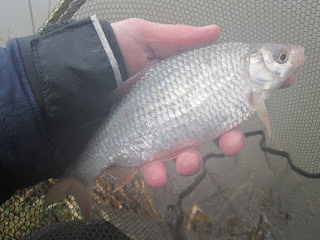 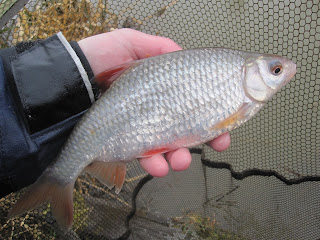 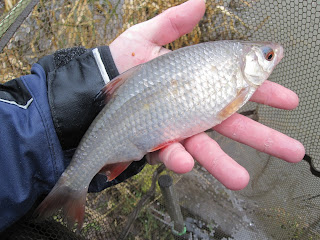