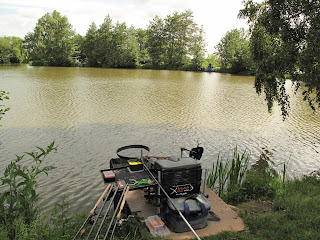 Day 4 and after two section seconds and one section fourth I was doing ok in the standings, just ok mind you...

A great night in the clubhouse with the lads and Neil with the game of killer taking ages on the pool table that we were quite late to bed!  The most amusing part of the night was Neil eating a £10 note that Juzzy was trying to bet with... The lads where rolling around laughing as Neil was chomping away on it to finally re-gurgitate it and give it back to Juzzy...

The Draw
Peg 13 on Beeches. A new lake to me both Beeches and Loco were in the draw and the promise of large fish was beckoning today. Peg 13 has a great right hand margin line with around 20 inches of depth and a nice platform for the fish to dine from.

The spirit of the festival shone through today with Bigun coming over and telling me how to fish the peg, when to put the groundbait in and when to finally put a double worm over the groundbait. With no worms, Bigun came over with a handful of worms for my margin! Thanks mate really appreciate it!

Set-up
The margin line was going to be my banker (hopefully) and the only pole line I would fish. I also took out a bomb rod, method rod and pellet waggler.

The margin rig was 0.22 direct to a size 12 and I was using black hydro which many said was underpowered with the size of the fish in Beeches.

All-In
The plan was to leave the margin until 1pm, feed 10 cups of groundbait, then leave it until 2pm with another feed of groundbait, this time only 5 cups and then to go over the line at 3pm.

For the first two hours of the match I would be using the method feeder, pellet waggler if I saw fish on the top and bomb/pellet if the fish didn’t want the method. I chucked out the method feeder and waited for 5 minutes, no signs, so back in and out again…

After the 5th chuck the tip went round and a fish then took me into the snag that Bigun had warned me about. Next chuck on the method I decided to wait it out for a bite. 30 minutes later, nothing and the first hour had gone. I was pinging about four 6mm pellets over the line and was getting some line bites.

Upping the rate of feed the fish started to show signs that they were shallow, so the method rod was put up the bank and the pellet waggler came out. 20 minutes on the pellet waggler and a few bites, finally a fish on. A F2 which is an F1 but a mirror carp, a quick fight and it was in the net.

Back on the bomb and pellet for another couple of fish until 3pm came round. Two large worms on the margin rig and pushing it into the position the float buried and black hydro came streaming out!

Right on time. “Get the net” I shouted to Bigun which was the call of the week. A lovely large mirror carp around 9lb finally came to the net after a 15 minute fight.

Putting another cup of groundbait over the margin and… Next put in, float goes and another large margin carp was on. This one insisted on swimming round my keepnets which was a worry until I final slide it into the landing net, a nice common carp around 7lb.

Another cup of groundbait and then the float went again, this time it was a small perch which wasn’t any bigger than the worms!

The final hour and all I got from the margins were Perch. So I started a new margin line further up but this didn’t result in any fish. All-Out was called and that was my day.

Result
32lb and a second in section. Winning the pound of Gary for the guesstimate again and a pound from Lee for beating him in section.

Conclusion
A day on a new lake which while slow I enjoyed. Thanks to Bigun for the help and advice. Last day of the festival tomorrow, can I stay on the top sheet of the results????