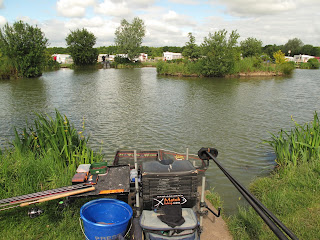 Final day and we would be back on Bonsai.  A fish and chip night saw the local chippy being swamped with a massive order.  A few beers in the bar and an early night for some.

Young Ryan was involved in the the 3 man lift, it can be found on Facebook somewhere.

This is one of Nathan's party tricks and most new comers fall for it!  Ryan was in a position to win the festival yesterday, but he had set up on the wrong peg along with other misdemeanors was awarded 4 points instead of his section win.  It was all to play for as a number of anglers could win the festival.

The Draw
An earlier draw today so that people could get away earlier.  Peg 67 would be my lot for the day.

Paul N had won the lake from this peg on Day 1.  I had Steve, Juzzy, Young Ryan and Paul N in my section today... a pretty tough section!

Set-Up
Again, the spirit of the festival came through with Paul N telling me exactly what he had done on day one, despite being in the same section as me.  Thanks mate!

Neighbour for the day Steve B who I had a pound with.  Fuzzy and Ryan were on the pegs that most want to draw so it would be a tough section.

All-In
I had the end of the island to target with the bomb and pellet line, but the wind made it quite difficult to ping pellets across the line so the heavy catapult had to come out of the bag.  I was also pinging some 4mm pellets over the 14 metre shallow and bomb line. 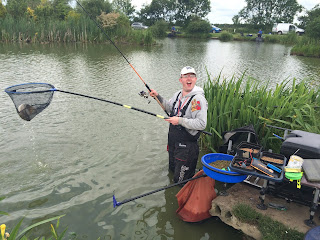 It took a while for the first fish but after 30 minutes I was starting to catch on the island line on a regular basis.  Now I must apologise to the regular readers as I caught on this line for 3 hours and as such there isn't a whole lot to write about...

Steve next door to me however was having a bit of a different match today... His rod almost got dragged in by a fish, going for his rod to save it he slipped and ended up in the water.  Everyone who saw it was howling with laughter and of course the photo opportunity was way too good to miss!

He did need a hand getting out the water and his reward was the fish and wet trousers, socks and shoes!  He took it well!

Nathan was the most vocal (no surprise) and popped his head out from the other side of the lake, another good photo opportunity! 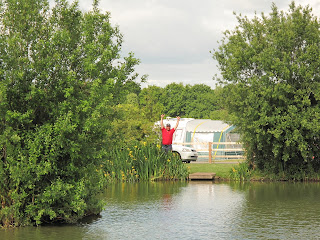 I primed the margin line with groundbait at 1pm with ten cups of loose groundbait.  Another couple of cups went in at 2pm, just like Bigun had advised.  I would try this line around 3pm.

Bites on both pellet lines where tailing off, so I had 30 minutes on the 5 minute line.  Two foul hooked fish and two broken hooklengths.  3pm and margin time... double worm and the float buried, a perch, not a good sign.  Another cup of groundbait and finally a carp, albeit a small one.  The margin line was not working... but neither was Steve's as he was getting roach and skimmers out.

Back on the bomb and pellet line, with the odd look in the margin and with that the all-out was called.

Result
56lb 2oz, only 2oz away from my guesstimate, taking another pound from Gary!  My result was only good enough for a section 4th.  Well done Juzzy for taking the section win and unlucky to Ryan and Paul who wouldn't win the festival this year.  A pound from Steve to add to the collection too.

Congratulations to Kev who won overall!

Conclusion
A great festival, again Gary had everything organised and it ran very smoothly.  Thanks to Neil and all at Lindholme for making it a great week!  Great to see all the lads again, roll on 2016!

Paul N was missing from his peg, so missed the chance to get a picture, sorry mate!

Hope your well, good read of blog as always ;-)

I'm set to go to Holland on September 1st, so I'll get settled in and then head out for some fishing adventures then...