June 01, 2015
A return to Wold Farm after missing last years MFS match here.  My last visit was back in 2013 with my mate Mark when we both had great bags of Orfe fishing shallow.

Today's match would be on Oak Lake which is over the back of the complex and a water I'd never seen before.

It was an early start to make sure I got to the venue for 9am and luck I set off early.  On the M1 I was passing a lot of classic Fords, Mark 1 escorts, Cosworths, Fiesta's and some old Cortina's.  I wondered where they were all going?

Well the answer was Santa Pod, all on the same road that I was taking to the fishery.  Upon arriving at Airfield Road, my last stretch before Wold Farm I was stuck in a queue of, yes, you guessed it, classic Fords, all of which were going to Santa Pod for the day. The last mile took 20 minutes but I made it in time for the draw.

While I'd made it to the draw I realised that I didn't have much cash in my pocket after a night out in London.  Josh came to the rescue and sub'd me twenty of the queens finest pounds.  Cheers matey.

The Draw
Colbrad had organised this match and was well organised which is to be expected.  He had made out three clipboards with all the pegs listed, I was today's peg bag holder for the crew.  As per normal everyone drew (except four stragglers who were wandering around the lake) and put their names on the boards.  We had three sets of scales, for the three sections so weighing in would be quick and simple.

Doddy drew for me, Peg 18 was my home for the day.  The four stragglers drew and everyone was off to their pegs.

Set-Up
Having been to Wold before I guessed it would be all close in fishing today and plumbing up I found a pretty even 5 foot depth on my top 2 and two sections.  The same distance also allowed me to reach the margin line on my right.  The margin on the left however was very shallow and also not very uniform in depth.  Pat Prichard summed it up, "it's like plumbing up in a ploughed field!".

My lines for the day:

I had set up pretty quickly and went around the lake grabbing photo's of all the lads for the blog but there was one person missing, George T (aka Liberace), so I took a picture of a blank peg just for you George ;-)

All-In
Dampened micro pellets kinder potted onto the short line and straight over with single red maggot on the hook.  The initial shotting of the float was strung out to explore the waters depth for fish. Throwing maggot over the line to try and tempt a response.  Float buried immediately with a small roach.

Continuing throwing in some maggots and then occasionally some casters the short line was coming alive and the silvers that were coming where starting to get bigger in size although I was getting plagued by small fish, so I upped the feed rate and changed to a single caster on the hook.  This resulted in a lovely acrobatic skimmer coming to the net.

The first couple of hours flew by.  I was topping up the swim with a squeezed ball of micro pellets every 4 fish, mainly good skimmers on this line.  I also changed to double caster to try and avoid any small fish.  Lifting and dropping the float was resulting in a good positive bites.

The swim died off a little so I took the opportunity to prime the margin line with some micro pellets and casters.  Back on my main line the float buried and something quite heavy was on the line.  I was a little worried as I was using yellow hydroelastic and a 0.10 hooklength... The fish plodded around no made dashes for freedom, slowly stripping back elastic I had the fish at my feet going round and round.  After what seemed like an eternity a large ghost carp popped to the surface and I managed to get it in the net first time!

I wonder if the large carp had pushed the other fish out of the swim?  I decided to pot in some more micro pellets with maggots to see if another carp was in the area.  Yep there was.  The float was wafting around, a few lift and drops and it buried again.  A large mirror came to the net.  This boosted my confidence in the rig and the elastic.

The swim really slowed and it took some time to get the bites back, throwing maggot on the line brought them back, small silvers to start and then back to some large skimmers.  Once the skimmers showed up I changed to throwing casters in which seemed to keep them coming.

The last hour of the match, the short line had died back, it had been plundered all match!  So I took the chance to check the margin line.  Double 6mm expander on the hook and the elastic tore out.  My suspicion confirmed a small angry barbel.  One carp from the margin and then nothing.

The last 15 minutes I took a couple of skimmers from the short line and then the all-out was called.

Result
64lb 4oz to take the section win, just pipping Pat, although I was worried about going over my 50lb net limit in one of the nets.  Unlucky for Steve he did and was knocked back which would have meant he would have taken the Section win.... ;-(

The section money allowed me to pay Josh back promptly.  Thanks for the short term loan mate!

Colbrad who was so organised at the beginning of the match came round asking who had the boards.  He had misplaced two of the section boards, brand new clipboards, purchased especially... did you ever find them Col?

Conclusion
The margin line didn't produce as I'd expected it too while the short line in front of me kept on producing all day long with one lull spell towards the end of the match, maybe I should have opened up a new short line to keep the fish coming?  I only lost two fish all day long, fed a pint of casters and maggots together with a pint of micro's.  A great days fishing, a simple match for me together with great company! 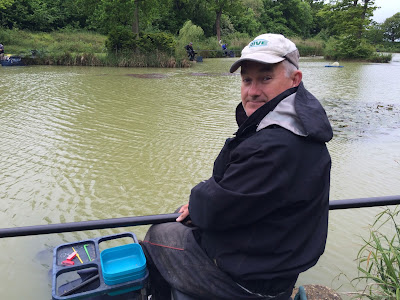 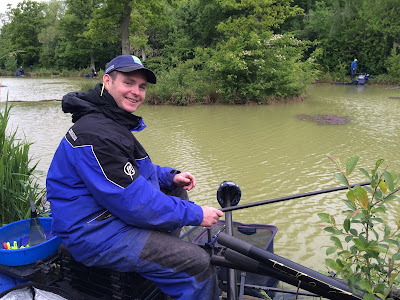