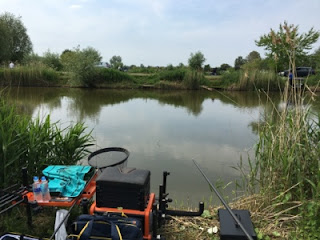 Another night of banter in the bar and an equally unhealthy evening meal from the nearest take away and for a change no hangover for me this morning.

The Draw
Today we would be on either Willows or Laurels.  Peg 24 on Willows was my home for the day an area I'd not drawn before.  The weather was oppressively hot, with very little wind resulting in no ripple on the water.

Set-Up
Getting to the peg I had stick ups right in front of me, so I fished them out with a weed cutter.  I didn't break out any rods and opted for a pole only attack with lines at 13 metres and 6 metres both with options at 2 o'clock and 10 o'clock.

One shallow rig just in case, other rigs at full depth.

All-In
The pole lines at 10 o'clock would be fed heavily, the other lines negatively via the kinder pot... I was already sunburnt from the previous day.  Today would be no exception weather wise.

I worked the negative lines for an hour with very little reward expect a few skimmers.  No-one I could see was catching anything. 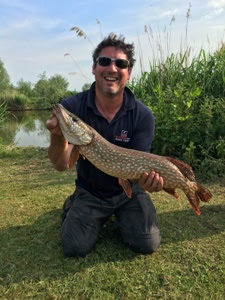 The next hour after topping up the heavily fed lines I tried pinging pellets and fishing shallow which resulted in nothing at all... Midge next to me was catching some fish in the margins, but the rest of our section was struggling.

Hour 3 I decided to start a chopped worm line at 6 metres.  I went straight over this line with a worm head.  Immediate response from the silvers.  At least there was some action on this line and I was hoping the carp would soon come and see what all the fuss was about.

What was to happen next surprised me and the people fishing around me.. the float buried and soon elastic was streaming out of the pole.  Big carp I was thinking, big carp I was hoping!

The fish took me all over the lake in front of me at 13 metres, it was almost lost in the reeds to my right.  Brian over the other side was asking how big the fish was and that's when I saw the tiger stripes.

"It's a bloody Pike" I called over and with that it swam straight into my net.  It's a good job I put the bigger net on today too!!!

It was hooked right in the scissors of its jaw.  I decided to get a new net out just for the Pike and didn't know whether or not it counted as part of my weight!

The rest of the day was pretty dull with only a few carp turning up on my lines.  Brian opposite was having a better run towards the all-out with his paste line getting stronger.  Sue only managed to catch a few fish from her peg and Len was having a good struggle with the fish in the stick up's on bread.

The All-out was called and then the debate over whether or not the Pike counted... 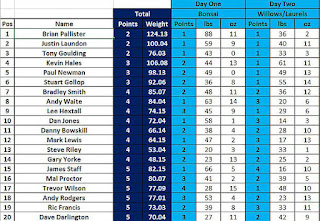 Conclusion
A dire day on the bank.  The Pike certainly made the day entertaining.  Section 3rd was a good result but both Laurels and Willows fished really hard!