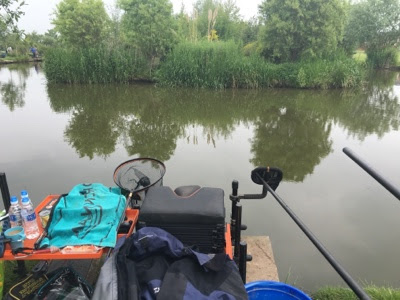 Final day...  If I would have a good result today I could make it to the top 5!  I think I piled a bit too much pressure on myself to be honest and today would test me.

The Draw
Peg 2, Bonsai.  Not an area I had ever fished before and I had some good anglers in my section so it was all to play for.  Neighbours for the day where Stuart and Bradley 'Steady' Smith

Set-Up
Pole only, initially although I would break the rod out later in the day.  Another day fishing longer as it was 16 metres to the far bank and 15 metres to my right margin line.

All-In
I figured that the bread working the other day it would also work on Bonsai so I prepared some discs before the all in.  With that and the whistle I started across on the far bank working the bread along the margins.  The action wasn't instant in fact it took some time before the first fish was in the net infact the first fish went to Brad who was fishing short.

Before long Brad followed me over and we had a race for a fish, which he won!  After a few frustrating hours, frustrating for both me and Stuart.  Stuart had lost a
few rigs, now it was my turn!  Fish on and it made a run which snagged me across the underneath the bank.  Pulled for the break and smashed the rig up.

I was hoping to do well on today's match and it wasn't going to plan!  A few choice words came out of my mouth.  So I sat for 5 minutes to compose my thoughts and cracked out the method rod which finally put me back in touch with the fish.  I was behind in the race with the lads and I needed to get back in front so I had to try the margins early. 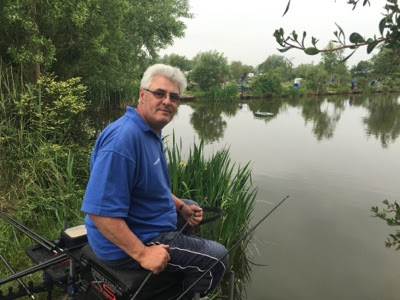 Priming with margins with groundbait and putting the tried and test worm on the hook the margins soon produced bites but frustratingly the fish were foul hooked.  This happened quite a few times and more frustration was verbalised.

Stuart had pulled some lumps from his margin and Brad has been catching "steady"!

The final hour was fun but the rain started... Stuart, myself and Brad would be weighing in most of the lake.  By the all-out it was tanking it down.  Needless to say the gear got soaked!

Results
Last in section with 29lb... very disappointed but still a good result for me coming 14th out of 50 Anglers

Conclusion
A huge congratulations to Paul Newman for winning the festival again!

Big thanks to Gary for all the organisation and to Rachael and Tracy for putting the bar on everynight.  It was great to make new friends and to see the faces of old friend!