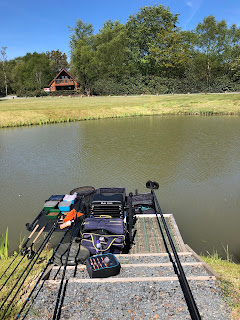 Stafford Moor May Spring Festival was too good to resist so a quick phone call to Hathers and I was on the festival filling in for one of the lads who couldn't make it this year.

Seeing Stafford Moor in full bloom the fishery looks absolutely fabulous and more credit to Paul and Jo for the great job they continue to do.  Festivals full, specimen lakes booked out, life at the Moor is looking very good in deed!

Lodging with Hathers, the mighty Spindle (the legend that he is), Hoggy and Perry Stone for the week replacing Dave Boyd for one year only!

The format for the week would be rotating around the five lakes, Willow, Oak, Tanners, Pines and Woodpecker and the sections had been drawn by Jo and Paul at the fishery.

The Draw
My starting lake would be Willow which would also be the first time I'd fished it too.

Set-up
A simple set up today targeting the far bank with Waggler and bomb/feeder.

13 metre pole line as a just in case.

All-In
I started on the waggler however quickly switched to the bomb after seeing both Jeb and Silvers fly out of the starting block.  In fact after 30 minutes, Silvers had 10 fish in the net.

It was pretty steady away until the middle of the match.  I was alternating between the bomb and waggler to keep in touch with the fish and keep them coming to the net.

The middle of the match things started to quite down for all of us.  To my right, Jeb was struggling and also Silvers peg had slowed.

I decided to open a new swim on my left, again targeting the far bank, this time with the feeder.  The pole line wasn't working at all for me anyhow with only a small skimmer coming from it, however this skimmer was to prove vital at the weight in!

Joe on peg 20, next to the bridge was able to reach the far bank with the pole and was putting fish after fish in the net.  Joe would end up lake winner from that peg.

I had managed to get back in touch with the fish and putting more in the net and was gaining on Silvers early lead.  The all-out was called, had I done enough to over take Silvers next to me?

Result
86lb 15oz grabbing section second behind the lake winner Joe on Peg 20 and ouncing Silvers proving that the skimmers are all important! 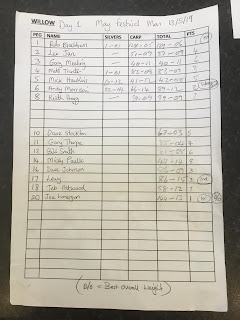 Conclusion
The fish in Willow are relatively newly stocked fish and have not yet wised up to the anglers.  They are also very pretty fish too!

The far bank approach was the way to go given all the noise we had created on the bank.  I was casting about a metre short on the bomb/feeder while others tight to the bank.  The waggler was down the shelf and at full depth and the fish gave a good account of themselves on this method too.

Opening the new swim to my left transformed the match and kept me catching!

A great start to the festival!

Apologies to Jed and his partner Christine for my flatulentic all day, which did make everyone laugh!