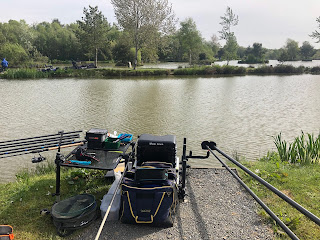 Well my hope of a high finish in the festival is fading fast, but hey its way better than working!

Next stop Pines.  The regulars to this festival say that Pines fishes better in the first few days of the festival and then tends to drop off as the skimmers take longer to "recover" from being caught.

It will be an experience not to fish it in the cold winter months anyway...

The Draw
Peg 7, probably the worst draw and this peg is either feast or famine and the weights during the week had not been brilliant from it either.

Set-up
Peg 7 is very wide and with the wind blowing straight into my face I decided to break out a feeder to target beyond pole range to the far bank.

All-In
Todays approach would be negative due to the cold wind and also the cold peg.

With the all-in I started on the feeder fishing across for the first thirty minutes after potting in a golf ball of groundbait and chopped worm.  The feeder produced nothing, no bites, no smashed bait, nothing so I went over the 13 metre line with a small segment of worm.

After 2 hours I don't have a lot of fish to show for the efforts and presentation at 13 metres with the wind and a deep rig just wasn't helping.

I decided that come short and fish the top two and 3 section line.  It was a lot easier to hold the shorter pole in the conditions and control the presentation of the bait, changing the bait also to expander pellet with a nugget of micros fed via the toss pot.

With the clock ticking down on the match, finally I was catching fish with clear bites from the lakes resident carrasio's.

I had two swims on rotation taking 2-3 fish from each swim before topping up and moving across left or right.  I didn't however feel that I would be able to catch up Joe, Lee or Dave Stockton on the pegs I could see, unless the large skimmers made a show.

Finishing the match on these lines I was hoping I had around 10lb in weight...

Result
9lb for last in the section and getting a right royal chip shopping... yep, battered by both sides 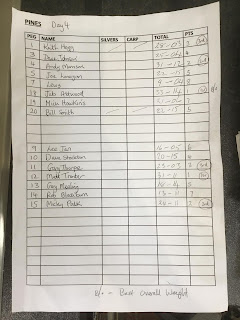 Conclusion
Well, can I blame the peg this time?  It's not know as a peg you run to however it can through up large weights at times.  Personally I think I just lost the will to actually try and catch fish which I ended up beating myself up over.  This is not the right attitude to have and I've given myself a telling off for being negative.

The positives, well the negative feeding approach certainly showed me the way to go.

The roach line I did have a few looks as I had drip fed casters in all day but nothing was caught on the line.