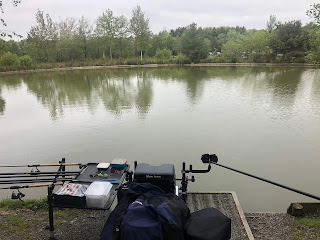 The final day and the final destination for the week is Woodpecker, normally a lake I shy away from during the winter silvers festival however I was looking forward to fishing for to a change and fishing for the carp.

The Draw
To be honest I wasn't too bothered where I drew today, so Peg 19 in the bay was home for the day.

We know that the carp are either here, or not... only time will tell.

Set-up
Again, another simple set up.  Bomb and Pellet Waggler rods out of the bag.  Pole for the margin, just in case.

All-In
The match plan was simple, fish the bomb and pellet in the bowl area in front of me, resisting the temptation to cast long however having the option should I need it.

The first couple of hour fishing the bomb I put two fish in the net, makes for a simple blog!  Gary on peg 18 and Bill on Peg 20 only had two fish also.  It was slow going that was for sure.

The fish had been showing themselves shallow and I had tried a wafter on the bomb and also a pop up critically balanced to fall through the water very slowly.  It was a good old 8mm pellet that caught the first two fish however I had to give the pellet waggler a good go, so decided to switch tactics.

The next two hours I fished the pellet waggler and lost 4 good fish.  I opted to put a white wafter on the line which was getting way more pickups from the fish than a pellet but for some reason I had two hook length breakages and two obvious foul hooked fish.

It was time to try something else as I still only had two fish in the net after four hours.  Bill was steadily catching and Gary was picking up some fish.

The margin produced only a small perch on a worm that was actually bigger than it, my only option was to go back on the bomb line casting long and short.  It was the short casting that changed my day.

Short on a longish pole line I was picking up fish on a regular basis fishing the bomb.  The main change apart from short is that I cut all feed out, no catapulting of pellets at all.

The all-out was called I'd managed to put 8 fish in the net, six in the final hour.

Conclusion
Was the bombardment of pellets spooking the fish?  Bill was catching steadily from Peg 20, which has shown plenty of form this week.  Had fish backed off from Bill and Gary's pellets and settled in the middle.  It certainly seemed that way to me.

I felt I gave the pellet waggler a good go and with four hook up it was gutting to loose two fish to a hook length breakage but that's fishing.

A great festival put on by Paul and Jo.  Many congratulation to the top ten placed anglers it was certainly tight.  Lets see if I can get on it next year too! 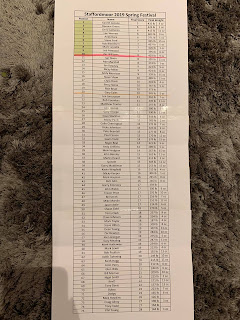