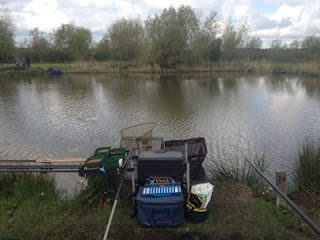 After an easy night on the beer everyone was bright and cheerful for todays competition.  We would be fishing Willows Lake.  Willows Lake is a rectangle shape with 3 legs reaching  to the centre each side.  Pegging would be generous again and the points at the end of the legs were the favoured pegs to draw.
The Draw
Today we would draw in reverse order to our finishing place yesterday, so I was in the middle of the draw and my home for the day would be peg 14.  A point peg and favoured as it had plenty of open water out in front of me.
The Set-up
The pole would be the main attack and as such I set up the following
I also set up a small pellet waggler in case I could not fish shallow at 16 metres on the pole.
The All-In
I potted in a small cup of 4mm and 6mm hard pellets on the 10 o’clock line and a small cup of chopped worm and caster on the 12 o’clock line and would feel my way in with the feeding.  The 5 metre line I could throw to so I would throw about 10 cubes of meat when feeding the other lines.
Out to the chopped worm line with a worm head and the float buried immediately resulting in a small roach.  This pattern would continue, with roach and skimmers coming to the worm hookbait.  After 30 minutes the line died off and it was time to top up the swim.  The effect was immediate and a small F1 came to the net followed by it’s bigger brother, then nothing...
I tried the pellet line and managed to take some silvers from it.  So after another 30 minutes I topped up both swims, a couple of F1’s would come, then nothing...  So I decided to kinder pot in some chopped worm each time I went out.  This brought the fish higher in the water and I foul hooked and lost a few fish.  I wanted to keep them on the bottom, so cupped in again.
I stayed on the 13 metre line for 3 hours of the match.  The weather was being kind to us and it appeared that the F1’s were higher in the water, so I gave both the pole and pellet waggler a go for 90 minutes.  This effort was rewarded with a paltry 6 F1’s, so back onto the 13 metre chopped worm line.
The pellet line wasn’t working for me, so I decided to concentrate on the 5 metre and long line in front of me.
I had a couple of mishaps during the day, lossing a fish were the hooklength broke and a number of tangles due to the short amount of line between pole tip and float and also a broken catapult.  Of course my spare was in the car... lesson learnt there.
I finished the day on the 5 metre meat line and had a handful of F1’s before the all out was called.
The Result
My two nets resulted in 21lb 15oz of fish and nowhere in the section, well last!  72lb 5oz won the match.
Conclusion
Feeding is the key to success.  This is what all top flight anglers will tell you.  I didn’t pick up on the heavy feeding required on the chopped worm line.  When I’d just cupped in, the F1’s were there, but after grabbing a couple they were soon off.  I was disappointed with my result, especially as I had a point, although the fish did seem to be in the bays.  Tomorrow we are on Laurels and it will be a similar attack as it was today, so lets see if I far better then.
Lindholme Lakes Hospitality by Neil and his team
The ladies in the kitchen had prepared us all a Meat Pie, mushy peas and chips for £3 a head.  The portion size was huge, very tasty and I couldn’t even eat my desert.
Neil was chatting to all the lads as we all broke down our day.  A very friendly fishery owner.
Onto the evenings entertainment and Aaron was feeling good at pool, so I took him on and lost.  He did miss some simple balls and could have taken me down leaving 6 balls, instead I was left with 3 balls.  Just for you mate! ;-)