April 02, 2012
A forum post on MatchFishing Scene popped up looking for two more anglers for the belated Fur and Feather Champion League Match at Grange Park Fisheries in Messingham.  A quick look at the diary, yep, free, I pay my monies and I'm on the match. 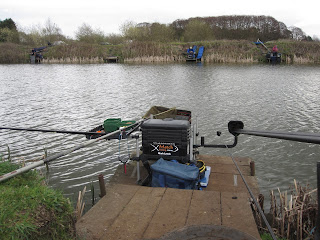 It was a couple of days later when I rechecked my diary that I was going to have to leave London around 4:30am to get to Messingham in time for breakfast, that this weekend would be a 500 mile round trip for me and to help there has been mass panic at the petrol stations due to threatened strike action, perfect timing!

I arrived at Grange Park Fisheries for breakfast and of course the banter was brilliant, especially as last time I was in this part of the world, even though I arrived with hours to spare I still missed out on breakfast as I was in the wrong place!

The Draw
After all of the MFS crew had arrived and fuelled themselves with a hearty breakfast, the draw commenced with Colin (aka Billy No Fish or BNF) drawing first and as per usual keeping his peg number hidden as he awaited two victims to drawn next to him... it was long before we were to reveal ourselves!  I drew H8 (Heron) and Colin was on H10, my day had arrived where I would be fishing to survive a "Battered by BNF" T-Shirt.  The other chosen victim was RedArmy who had battled with BNF on 6 other occasions and survived.

The Set-Up
The lakes at Grange Park are simple rectangular strips with a dividing wire down the centre and it's generally a pole anglers venue so there were no rods broken out.  I decided on three lines, they were:
Depth was around 4 foot after the inside shelf and bait for the day would be fishery micro pellets, 4mm expanders, corn and dead maggot.

The All-In
No sooner had the all in been called did the wind pick up making the long 13 metre line very difficult to fish.  The chilly wind was blowing from my left straight into the corner peg that was H10 where Colin was sat, grinning... see the picture of him and you can see his smile from a mile away!

I managed to cup in some dampened micros and dead maggots on the 13 metre line and started to fish on my top 2 and 2 sections, or 5 metre line.  The wind was making fishing very difficult and despite being 2 and 3 inches over depth my pole float was trotting through the swim.

I had back shotted the pole float and ended up submerging the pole tip and line to pole float in an effort to hold my bait steady.

Meanwhile Colin was catching next to me and they were fish of a decent stamp, better than the small carp and cruicians I was getting.  Each time I heard a splash I was forced to look over and there he was chuckling away and grinning.  As the match worn on, my shoulders where dropping!  A wave of tireness also hit me and I had those moments where I blinked, but actually went into a little snooze!

Bites where few and far between but I managed to string some fish together but Colin had out fished me on the day.

I was unable to fish the 13 metre line due to the wind.  My margin lines, both long and short didn't produce any fish and all fish were caught on the 5 metre line.

The craic from around the lake on any Match Fishing Scene match is brilliant, even better when your all so close on the two lakes and I was certainly getting my fair share of micky taking.  The all out whistle could not come soon enough!

The Result
I knew that I would be lucky to have any where near 8lb, the scales would record 6lb with the all important weigh in from the next peg, Colin put 15lb 4oz in the net and my fate was sealed!

Overall result, 2nd last out of 26 anglers, not my finest performance.

Conclusion
No excuses will be allowed in this section as I simply could not put a run of fish together.  Yes the wind made fishing very difficult and it was extremely cold given the fabulous weather we had the week prior.  The results showed that those at the top end of the lakes put better weights together than the others at the windy end.

So here are the shots of my T-Shirt presentation moment.  The upshot was that coming second last allowed me second choice of the fur and feather gifts, so thanks to whoever brought the bottle of vodka ;-)