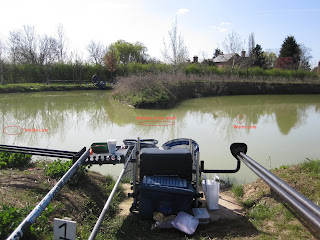 A match that was in the calendar for a while was a return to Phil Stone's fishery, How End.  Phil shuts the fishery for the month of April but had kindly offered April's fools day to the Match Fishing Scene crew for another Champion Leagues match.

I was definitely looking forward to seeing how the fish had grown since my visit last May.

Arriving there were already a bunch of the lads waiting outside the gate and it wasn't long before Phil came round and welcomed us all in.  The weather couldn't have contrasted the previous day any more... it was bright sunshine, not a cloud in the sky and very little wind.  I of course was wearing my "Battered by BNF" shirt so the lads would know that I was beaten by Colin at Grange Farm, so of course the banter started as soon as I got out of the car.

I had a walk around Yasi's and Dani's with some of the lads to see how the fishery had come on in the 11 months since I fished it.  The grass has grown, the islands, Phil keeps well maintained.  Overall everything was looking really good, the tackle shop is now looking like a tackle shop.

The Draw
We all gathered in the tackle shop and paid our pools monies, ordered our breakfast and tea or coffee which Phil's good lady, Tanya would deliver to our pegs a bit later.

I pulled out Yasi's peg 1, a very short walk from the car park and to the point of the island.  A peg that wasn't fancied by many and that had performed so well in the winter league.

The Set-Up
Again, pole only today so I was set up in no time at all.  Phil came round and told me to fish the bottom of the far shelf, set up a worm line over to my right and asked me if I had maggots.  Well I always have maggots, but they are always dead maggots.  So Phil said, come back to the shop and get a pint of mixed live maggots.

How End Fishery was dug out and measured using lasers to ensure a uniform depth so my far shelf and worm line could use the same rig.  I also set up an inside line rig which I would try later in the match if the other lines dried up.

The All-In
Phil had warned everyone not to cup in too much bait, so I put a small kinder cup of chopped worm and caster on the worm line which I would top up every 30 minutes.

Going to the far shelf with a pinch of maggots in the kinder pot and a single red maggot on the hook it wasn't long before the float buried and I had my first ide in the net.  Although there was a problem, the sunshine had really come out and my red topped float was very difficult to see, so I decided to change it to a yellow topped float which only took me about 5 minutes and I could read the bites a lot better.

Neil to my left was catching shallow using the long pole and was catching on a regular basis.  Paul Law was on the other side of the lake and he had two small carp early doors.

My bites however where taking a little bit of time but I soon got into a rhythm where I would put 5 or 6 maggots and a small amount of dampened micro pellets in the pole pot, ship out drop the pole pot from a bit of height to create a splash and then follow the cloud and bait down.  If a bite didn't happen in the first couple of minutes, a lift and drop to try and entice a bite, if after 5 lift and drops no bite, then repeat the process.

I was catching on a regular basis on the far shelf and the Ide had definitely put on some weight since my last visit.  The far shelf line died off slightly, so I went tried the worm line, after 5 minutes and nothing, so back to the far shelf.

Through out the day I had a coupe of 20 minute spells where the fish had simply dissappeared, but I continued on the far shelf line and eventually the fish would come back.

At the all-out it was clear that myself, Neil and Paul Law had put some fish together during the day.

The Result
Myself and Neil where on scale and boards duties and I was the first to weigh in.  I put 16lb 8oz in the net and was well happy with the effort.  Neil had managed 13lb and Paul Law 15lb.  So it was looking good from our end of the lake.  That was until we weighted Colin (Mad Dog's) net in, again from a very unfancied peg.  Colin put just over 18lb in the net.

One of the lads of Dani's had managed 17lb, which gave me an overall third place!  I was over the moon and I had been wearing the "Battered by BNF" T-shirt all day, talk about going from zero to hero over the weekend!!!

Conclusion
How End Fishery, brilliant, don't expect massive weights but expect a fishery that will give you plenty of bites.  Phil and Tanya are exceptional hosts.  The lakes and surroundings are coming on and the fish are starting to put on the weight, role on the next match there, although I would like to try and fish Dani's.
How End Fishery Match Fishing Scene (MFS) Matches
Location: 52 Bedford Rd, Houghton Conquest, Bedford, Central Bedfordshire MK45 3NE, UK