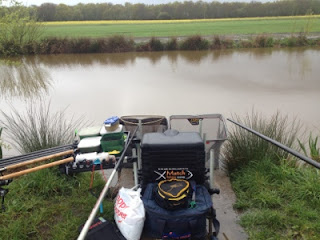 The weather didn’t look promising again today.  The gear is soaked from yesterday and it looked like today would be the same!  We were fishing Oasis today.  Oasis is a U shaped lake of uniform width, around 16 metres.  The favourite pegs would be the 40’s and pegs 2 through 10.  These pegs are were the wind blows in to.

The Draw
I drew out Peg 35, on the favoured side of the lake, it was also the Golden Peg for the day, so a lake win would have netted me £300, little chance of that with the stamp of anglers in the group.
Parking was easy, right behind the peg with a short walk over the sodden earth.
The Set-up
Pole and Method were broken out.  I’d use the method if the wind got up and made it difficult fishing at 16 metres.  It’s hard enough fishing at 16 metres without the wind!
Pole Lines were:
The All-In
It was raining while setting up and as the all-in was called it was still raining.
I cupped in micro pellets on my far shelf line and chopped worm on the near shelf line.  I baited up a peice of 6mm meat and shipped out 16 metres to try and mug a couple of early fish.  It worked and I had two decent carp in the net after 15 minutes.
The far shelf line quickly died away, so I went over the pellet line with 6mm expander pellet.  A couple of foul hooked fish and the line went dead.  So I topped up both far and near shelf and started to feed the margins with around 5 pieces of meat, I’d do this every 30 minutes and as the match progressed up it to every 15 minutes.
Turning to the method, I cast to the far bank and quickly had a fish in the net, a decent F1.  For the next 3 hours I stayed on the method line, still topping up the pole lines just incase.  I found that I had to chase the fish across the far bank and had two main spots to cast two, rotating between fish.  Pinging 6mm pellets over the method also encouraged bites.
The method was baited with dampened micros, mixed with F1 groundbait and luncheon meat hair rigged, or a 6mm pellet banded.  The luncheon meat was producing a better stamp of fish.
With 2 hours remaining, the method line died and I went across to the far pole line, nothing.  The near shelf chopped worm line produced some skimmers, but nothing substantial.  I struggled along and eventually went down in the margin.  First fish came quickly, then disaster, striking, the rig flew up into the tree and tangled, so I dropped my method in the margins and managed two more fish before the all-out.
The Result
33lb 5oz and a section 3rd.
Conclusion
I felt I had the plundered the method line on the far shelf and was surprised there wasn’t more fish on the pellet line, which had remained untouched for a number of hours.  The lads either side of me were fishing shallow and while it didn’t work straight away, they kept the fish coming and both anglers beat me by around 10lb and 20lb.  Must learn to fish shallow!
Aaron’s Pool Challenge
We managed a game early in the evening before the beer kicked in and as such it was treated as a practice match.  Needless to say, I whooped him on the practise match, but couldn't take the victory out of principal ;-)