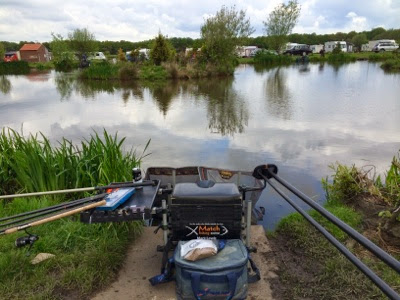 After fishing at How End I drove up to Doncaster and met up with all the lads, the beers and dodgy spirits were soon flowing. Not too late a night and back to the lodge and a sleep in at last rather than my normal early start to Paris with work.

The Draw
Both Keith and I were a little late into the cafe after our home cooked breakfast. Everyone was there and the line formed for the draw bag. We would be fishing Bonzai today, I drew out peg 65, somewhere I had been before the previous year and as both previous festivals I was pegged next to Keith!

The Set-Up
Given I had an island chuck the method rod was straight out of the bag. Pole lines for the day were:
Bait for the day was 6mm, micro and expander pellets, sweetcorn, worm and dead red maggots.

The All-In
Micros and some corn potted in on the 5 metre line and then picking up the method rod casting to the island with micros and 3 dead reds. There was plenty of fish activity around the lake with fish swirling and also the tip moving as soon as the feeder hit the water. It wasn’t long before the first fish was on and it was soon before the first fish was off again!

Eventually I started to string some fish together but I was loosing some fish either on retrieve or just before netting which was frustrating, so I changed the hook length which made the difference.

I wasn’t catching at the same rate as Dave on the next peg and Keith had soon got the fish shallow.
I was casting around the island to try and keep in touch with the fish, but the bites were taking longer, so I decided to change to the 5 metre line.

It was clear that the fish were shallow as the rig was bobbing up and down and I had foul hooked a couple of fish which were also lost. So, the shallow rig came out which didn’t produce any results.
Keith was also having to swap from shallow to full depth and then the rain came!

I potted in a full cup of chopped worm to try and get the fish on the bottom. Going back out on the line and more fouled hooked fish, so I shallowed the rig by 6 inches, but nothing.  Back on the method line as this was producing fish but not quickly.  Dave was catching regularly from the point of the island.

As the last hour arrived I had a look in the margins where I had been cupping in loose groundbait and some sweetcorn. A quick F1 and few skimmers, then nothing.

I opted to try the method over the 5 metre line which only produced a tench. I thought, lets try the method in the margin which caught me some decent F1’s. This is where I stayed until the all out was called.

The Result
48lb 11oz and 3rd in section. Plus I got a "minxing", Tracy Streets whooping my butt and getting me on the Minx list!

Conclusion
Not being able to get a run of fish proved frustrating, but it was the same for most on the lake. I was happy with 3rd in this section, lets see what tomorrow brings!