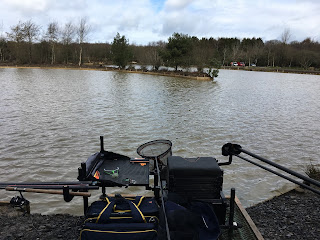 Day 2 of the MFS Silvers festival at Stafford Moor.  As I'd been on Tanners the previous day my group would be fishing Woodpeckers.  Woodie's had not thrown up large weights the last two days so a good draw would be needed.

The Draw
Woodpeckers has been re-pegged by Paul and my draw resulted in Peg 18 (old peg 32) in the bay at the back of the lake.  I've been here quite a few times over the years and never had a good result from it so I wasn't too pleased with my drawing hand.

Neighbours for the day were Hathers and Al Rutherford.

Set-Up
Pole lines today would be

I also set up the waggler to cast around the bay.

All-In
I spoke to Steve Martin who had fished this peg earlier in the week. His advice was to put in chopped worm on one line and leave for as long as possible before going over it. The other line would be fed with groundbait and maggot fished over it.

The first hour I decided to fish the waggler into the bay in the hope of picking up an early bonus fish. No such luck on that score! The wind was really starting to blow down the lake making the job of cupping out fed very difficult.

I tried to fish over the groundbait line and picked up some fish but presentation was made very tough by the winds. The pole was getting blown all over the place.

Hour 3 and I topped up the worm line while having a look on the 5 metre line. This started to produce some fish, a couple that were of a better stamp. I’d almost given up on my long lines due to the wind and was a little annoyed as I really wanted to see what was on the worm line.

Moving into the final hour I’d hooked a large carp close in… it came to the net without much fuss which was a relief. The worm line was calling. Struggling in the wind I fished over it and hooked what could have been a large skimmer the way it fought and was coming back in. The hook pulled and the fish was never seen just as the all-out was called

Result
4lb 5oz and I lost a pound to Hathers!

Conclusion
I always seem to draw in this bay on Woodpeckers and today the wind really hampered my day. On hindsight I should have opted to fish closer in with the chopped worm line. I did attempt to fish the waggler on my longer pole lines but this only produced a couple of smaller fish.