March 11, 2012
Mark had come down to London for the weekend so we could fish Gold Valley and also at charity match at Sivyers Lake.

The weather had definately warmed up so we were both looking forward to some Gold Valley Carp.

Mark chose the infamous peg 57 where he could cast to the little bay outside the clubhouse steps where the water is deepest.

Andy Gregory and Barry Parker came over to say hello. They were fishing a match on the Basingstoke Canal. 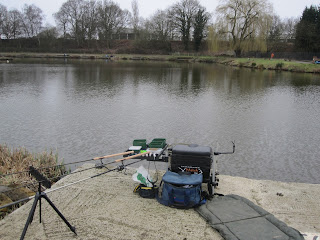 The Set-Up
We had both decided that we would have a day on the rods rather than breaking out the poles.

Bait for the day was soaked micros and groundbait for the method and cage feeder, 8mm pellets, corn and dead red maggots.
Mark had also set up a method feeder and waggler. 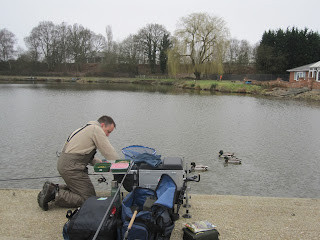 I put the method feeder out short of the central rope, which would give me space if the fish backed off later in the day.

While the method was out I was pinging 8mm pellets half way, looking for line bites and signs that the fish where in the area.

The method feeder was recast at every 15 minutes.

Mark was fishing a couple of metres away from the steps.

After an hour, we were both fish less and more worryingly, no signs of them topping, no line bites, nothing.

You could see bubbles from the lakes skimmer population around midway, so I changed from the method to a small cage feeder.

The two hour mark came and went and eventually the tip pulled round. The first skimmer, around 1lb was soon in the net, followed soon after by it's mate. Still no fish topping and no carp.

Mark also netted a skimmer, but the day wasn't turning out as we'd expected or hoped.

My next fish was a roach around 4oz, Mark was down on fish, but that would soon change.

Mark next attack was to cast as close as he could to the steps for which he was rewarded by the first carp of the day. It was around 6lb in weight and my day was going down the pan!

Mark netted another 6lb carp and our 6 hour match came to an end. I'd been battered and Mark took the win.

We fished on and predictably Mark had another couple of carp.

I tried the waggler, shallow and at full depth but no fish.

The Result
Mark battered me 14lb to 2lb (estimated).

Conclusion
The wind was blowing out from peg 57 and the water never 'rippled' up, which could have been a sign that the carp where further down the lake and possibly due to the milder weather in shallower water.

Interestingly, no one else on Gold Lake appeared to be landing any fish of note.

A hard and surprising day for both of us, maybe we should have got the poles out!